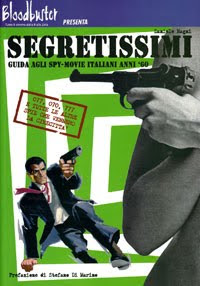 Screen Archives Entertainment is now carrying imported copies of the new Italian book on the Eurospy genre, Segretissimi: Guita Agli Spy-Movie Italiaini Anni '60 (Top Secret: A Guide to Italian Spy Movies of the Sixties) by Daniele Magni.  English-speaking readers, beware: the text of this book is in Italian only!  If you want a great introduction to, exploration of and all-around bible for the Eurospy genre, look no further than Matt Blake and David Deal's The Eurospy Guide

.  It's absolutely essential!  But if you've got that already and you love the genre, there are so few books on the subject that you might want to snap up Segretissimi even if you don't read Italian.  (I hear it also has a lot of pictures!)  Here's the publisher's blurb:


Text is in Italian!

228 pages in Italian Language containing the Plot, the Cast, the Foreign Title of hundreds of movies. LIMITED EDITION OF 500 HAND NUMBERED COPIES.

Also includes a black and white Poster or Playbill for each movie listed.

Everyone knows James Bond, Agent 007. But how many remember Agent 077, or agent Joe Walker, or Agent 3S3, cheap copies of Ian Fleming's celebrated character made in Italy? Yet each of these characters was so successful that they were the protagonist not only of one, but a series of films. Within a few years, between 1965 and 1968, Italy produced (or rather co-produced) just under two hundred films in the espionage genre, in the wake of success of the 007 films. By the law of numbers, at least some of these films are worthy of rediscovery. Follow us on this journey into one of the less popular genres of Italian film, and you will be surprised to find how many Agents licensed to kill by Cinecitta' conquered the world. Dictionary of all the Italian Spy Movies of the '60s, written by Daniele Magni. Foreword by Stefano Di Marino.

Are you going to pick up a copy?

I sure want to, but I'm not sure I can afford it right now. I've got to make choices, and as much as I'd like another Eurospy book, I'm not sure a book in a language I don't read a word of is necessarily the right purchase to make when funds are a bit low. But we'll see. If I do pick it up, I'll write about it here!