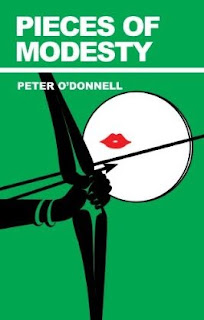 Modesty Blaise News reports that Peter O'Donnell's long out-of-print collection of Modesty Blaise short stories, Pieces of Modesty (surely one of the greatest titles of all time, I've always thought), is finally available again!  The title has been issued at last by Souvenir Press, who have reprinted all the other Blaise books (including O'Donnell's only other story collection, Modesty's swan song Cobra Trap

), but took a few extra years in getting around to this one.  This edition will be of particular interest to collectors because of its cover art.  All of the other current Souvenir trade paperbacks reprint the cover art from the original Souvenir editions, but Pieces of Modesty was for some reason the only Blaise book that Souvenir didn't originally publish in England.  The artwork they've used is certainly of a piece with the covers for some of the previous books (including the UK first edition of the first novel

); what's unknown is whether or not it's original artwork that's been on the shelf for years, or a newly commissioned work in the same style.  Modesty Blaise News has a fascinating publication history of this title, as well as a great gallery of all the covers.

Collectors certainly aren't the only ones likely to be interested in this new edition, however.  Even casual Modesty Blaise readers–or those who have never read one of O'Donnell's books, but are curious about them–should rejoice!  In my experience, Pieces of Modesty has always been by far the scarcest Blaise title, which is too bad, because it's got some great stories and actually makes a wonderful introduction to the character.  When I was first tracking down all of these books (prior to Souvenir's current line of reprints), it took me a long time to find Pieces of Modesty.  I eventually lucked into the Mysterious Press hardcover first edition at remarkable bargain price, and subsequently acquired a couple of paperback versions–but paid a fair amound for them.  I'm really glad that this book will now be available in print for new readers to discover without having to go to the ends of the earth–or pay exorbitant prices

–to own.  As I say, it's a great introduction to the literary incarnation of the character.  If you only know Modesty through Titan's excellent comic strip reprints

Souvenir Press's new edition of Pieces of Modesty is available now from Amazon.co.uk and due out at the end of March from Amazon.ca.  There's no US release date yet, but I'm sure if we're patient it will turn up on these shores soon enough.  All of the other Souvenir reprints are available through US Amazon.
Posted by Tanner at 2:41 PM

For some reason I could never get into Modesty's strip adventures. To me she reads better in novel form. Was not happy with the swan song.

Yeah, I thought the final story, Cobra Trap, was a letdown as well... although I like the basic IDEA of it. But let's avoid getting into too deep a discussion of that here for fear of spoilers!

Did you try the strips starting from the beginning, Delmo, with the Holdaway art? While I appreciate his stuff, it takes me a LONG time to get through. I found that Romero injected a lot more zing into the comic strips. If you haven't tried any of Romero's, I'd recommend checking out his first volume. (I'm blanking on the title right now, but I can check when I'm at home.) Overall I think the Romero ones are a lot more accessible than the Holdaway strips.