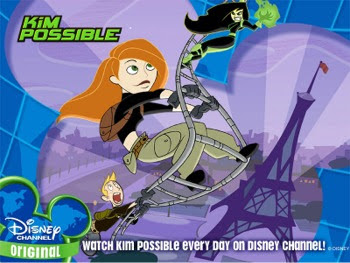 Kim Possible Returns
Disney Channel began broadcasting the fourth season of their animated teen spy series Kim Possible this past weekend. Now, I know what you’re thinking: Alex Rider, Young Bond... enough with the kiddie spies already! But the truth is, like those others, Kim Possible is by no means limited to kids. In fact, while they’ll enjoy the adventures and the typical cartoon comedy, a lot of the jokes will go over their heads.
The brainchild of creators Bob Schooley and Mark McCorkle, Kim Possible is one of the sharpest, smartest James Bond parodies ever. It often deals with the myriad problems of being a Bond-type villain, from the overhead costs of maintaining elaborate underground or underwater bases, to the perfect real estate for said lairs, to the difficulty in finding good help. (Turns out that standard-issue henchmen are provided by an entrepreneur named Jack Hench who runs a large staffing agency.) And it does so even better than the Austin Powers movies ever did, calling out the cliches and turning them over on themselves. At the same time, the love and reverence for the material they’re spoofing is also evident everywhere, from the clearly Ken Adam-influenced designs to the music to the Bond-inspired title sequence of the Kim Possible movie, So the Drama.

Disney Channel cartoons usually run 65 episodes and a few direct-to-DVD movies before being cancelled, victim’s of Disney’s mandatory euthanasia. But so popular was Kim Possible that it was brought back from the land of cancellation, the channel’s first cartoon since DuckTales (I think) to exceed that self-imposed limit. And since things had been pretty thoroughly wrapped up in the movie (which served as the finale to the original run), the new season breaks another unwritten cartoon rule and ages the characters (slightly). They’re still in high school, but Kim and her sidekick Ron Stoppable are now seniors. And their main adversary, Dr. Drakken (voiced brilliantly by Futurama’s Bender, John Di Maggio), is surprisingly still in jail. Luckily, the show has a reliable repertoire of equally amusing villains, and some of the second stringers stepped to the fore-front in the season’s first four episodes, which were broadcast Saturday night. Even after two years off the air, Kim Possible has lost none of its charm or humor, and is well worth checking out for any spy fan with a sense of humor–especially one who also appreciates good animation.
New episodes air Saturday nights at 8 on the Disney Channel; reruns air weekday afternoons. There are unfortunately no season sets, but there are several good "best of" DVDs available (I recommend starting with The Villain Files), and two DVD movies. You can also watch episodes online on Disney's site, or download some from iTunes. And to read a good interview with Schooley and McCorkle, in which they discuss what to expect in Season 4, head over to Newsarama.
For more information on Kim Possible, you can brave Disney's noisy homepage for the show, but consider yourself warned.
Posted by Tanner at 7:25 PM

Very nice commentary about Kim Possible and yes the Fight for Five to get Kim Possible back on the air is on, and stronger then ever before. We the KP fans worldwide believe that Kim Possible shouldn't have been cancelled and deserves to continue on in a Season Five and to allow Kim and Ron to go to college together. We're hoping to get as much public attention as we can, as Disney might have the money and the might, but we have the hope, the faith, and the belief that Kim Possible is worth saving.

Please check us out at the Ron Stoppable website's general Kim Possible discussions http://ronstoppable.proboards89.com/index.cgi and the Fight For Five website www.fightforkp.com

Thanks for stopping by! I will get a post up about the Fight for Five this week, for sure. And I'll definitely come check out Ron Stoppable's website as well!