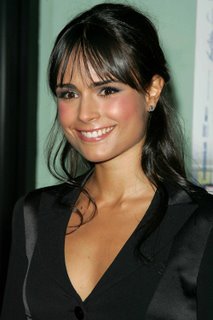 Jordanna Brewster, who to me will always be the hottie from the otherwise forgettable The Faculty, has been cast in the Angelina Jolie role of Jane Smith in the TV version of Mr. & Mrs. Smith, according to the Hollywood Reporter.

The TV pilot is written by Simon Kinberg and directed by Doug Liman, the same team behind the 2005 film version. Says the Reporter: "It revolves around John and Jane Smith, a married couple who are spies.Brewster will play Jane, who is as cool, tough and smart as she is gorgeous and can disarm a horde of thugs without breaking a sweat. Kinberg penned the script and is executive producing with Liman and Dave Bartis." The TV series reportedly picks up six months after the events of the movie.

It's certainly debatable whether or not Mr. & Mrs. Smith is technically a spy movie, since the characters were assassins, not agents, and worked for no obvious government agencies. The Reporter article, however, clearly says "spies." So are they spies now, working for governments? And if so, the same one or rivals? Whatever the case, the movie was great--a whole lot of over-the-top fun--and clearly had enough tropes of the genre to qualify as "spy" for me.

Jordana Brewster is beautiful, sexy and talented, and on top of all that, she kind of looks like Jolie. I think this is an inspired bit of casting, and combined with the fact that the primary creative forces behind the movie are also behind the show, I'm definitely giving it the benefit of the doubt for now. I just hope that they find a good surrogate for Brad Pitt, and, most importantly, maintain the gonzo, cartoonish OTT style and attitude of the film.

Ms. Brewster's other roles include The Fast And the Furious (the first one, with Vin), Texas Chainsaw Massacre: The Beginning, D.E.B.S. and the guilty pleasure TV mini-series The Sixties (which I'm absolutely shocked, shocked(!) to see that Amazon sellers are now getting upwards of a hundred bucks for. And here I was too ashamed to admit I owned it!)
Posted by Tanner at 6:08 PM