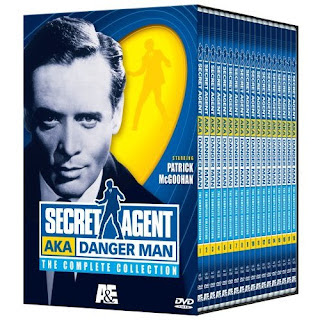 There are a couple of notable new spy-related DVDs out today. BBC's conspiracy thriller The State Within, a six hour mini-series that just finished airing this past weekend on BBC America, stars Jason Isaacs (Lucius Malfoy to Harry Potter fans) as a British ambassador caught up in Washington intrigue. It's been compared to MI-5 and 24, and the production values are certainly there, though it's premise seems a bit preposterous. I'll have a full review up soon. For anyone who hasn't already amassed all the individual sets, or bought the previous megaset, A&E delivers a new Secret Agent collection with the lofty title Secret Agent aka Danger Man: The Complete Collection. This new box collects both the hour-long series (previously released as Secret Agent) and the original half-hour series (previously released as Danger Man) together for the forst time. On 18 slimcase discs, you get every episode ever made of this fantastic Patrick McGoohan show, including the final two color episodes. (All the rest were black and white.) Before he was The Prisoner, McGoohan starred as John Drake in this, one of the all-time classic spy programs, and source of the famous Johnny Rivers theme song, "Secret Agent Man" (which was recorded for the American credits sequence, and appears here as a bonus feature).
Posted by Tanner at 11:59 PM