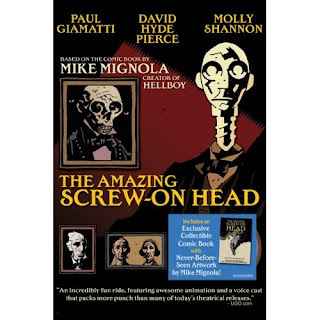 The Amazing Screw-On Head is a twenty-two minute TV pilot that failed to get a series pick-up on SciFi Channel, yet still managed a DVD release. It’s a real oddity, and a bit of a masterpiece.
Based on Hellboy creator Mike Mignola’s brilliant, absurdist one-shot comic book, w

riter Bryan Fuller (Wonderfalls) delivers a surreal cartoon that captures the spirit of its source material, expands on it, and sets it up as the basis for a series. The plot adheres fairly close to the comic, and there’s barely enough of one to fill the scant twenty-two minute runtime. But there are enough cool characters, gadgets and situations that you definitely want to spend more time with them.

Screw-On Head, voiced by Paul Giamatti, is a robotic secret agent whose head can be screwed onto any number of strange, Victorian mechanical bodies. When the evil Emperor Zombie (David Hyde Pierce) steals a tome from the Museum of Dangerous Books and Paper–and kidnaps the only man capable of translating it–President Lincoln sends Screw-On Head to investigate. The strange trail takes him to Marrakesh (by rocket) to the Mississippi, and brings him into contact with an old lover (Molly Shannon), whom Emperor Zombie has turned into a vampire. Emperor Zombie’s dastardly plot involves freeing a demonic demi-god from a turnip, and then using it to take over the world. Needless to say, Screw-On head foils the plot (with the aid of his trusty valet, Mr. Groin, voiced by Patton Oswalt), but that’s almost inconsequential to the zaniness transpiring onscreen.

Where Fuller has fleshed out the story from the comic, it’s barely noticeable. Everything still feels very Mike Mignola, and it was a good idea to flesh out some characters Mignola only mentioned ("two horrible old ladies and a monkey with a gun") and turn them into additional villains. Where he stumbles slightly is in adding backstory to Screw-On Head and Emperor Zombie, and creating a love triangle between them and the vampire woman. From a character standpoint it works, but in providing any sort of explanation, it diminishes some of the comic’s utter absurdity slightly. Still, it makes for exciting and rewarding viewing.

The animation itself is based directly on Mignola’s artwork, and does a great job of translating his unique, shadowy style. It’s not perfect, but it’s enough to make me really want to see a Hellboy cartoon done like this, even though Tad Stones & Co. recently pulled off an amazing Hellboy animated movie in their own style. (Mignola contractually forbade them to use his look.)
For such a short running time, The Amazing Screw-On Head provides a surprising amount of bonus content. There’s a short storyboard/animatic/finished product comparison, and a behind the scenes documentary that’s as long as the show itself. The featurette covers all aspects of creating the show, and does it really well, even if it misrepresents a few participants’ viewpoints. There’s also an informative commentary track by Brian Fuller and director Chris Prynoski.

Most interesting of all, there’s a sixteen page booklet of production art by Mignola and Concept Artist Guy Davis. There are some great designs here, wonderful additions to Screw-On Head’s world that really make me with the series had continued. In addition to several intriguing alternate bodies for the title character (like "unicycle body" and "cannon body" and "suit of many hands"), there is an enigmatic villain with a potted flower for a face. Only Mignola can pull that off and have it be as spooky as it is funny. He says in his notes that this character would have been a Moriarty-like smooth-talking criminal genius. Ah, what might have been! Perhaps if the DVD sells well enough, there's still a chance of the series being picked up by Cartoon Network or Comedy Central or something...
At the bargain price of $9.99, The Amazing Screw-On Head is a great value. The additional materials ensure that you really get your money’s worth despite the brevity of the main attraction. Fans of the more surreal side of spying, like The Avengers or, particularly, Wild Wild West (or Lucifer Box!) would be well-served to check this out.
Posted by Tanner at 10:31 PM