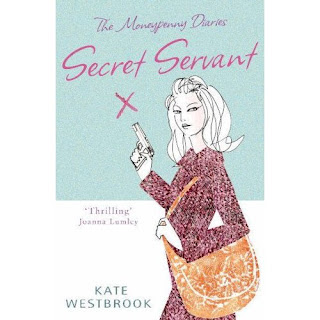 The Young Bond Dossier points out that the paperback cover art for Samantha Weinberg's Secret Servant: The Moneypenny Diaries Vol. 2 has been revealed on Amazon.co.uk. Weinberg is again credited only by her pen name, Kate Westbrook. (Who is actually a character in the novel.) Like the hardcover and the paperback of the first Moneypenny Diaries book, Guardian Angel, the art is again way too girlie (more likely to put off potential male readers, who are actually the more likely audience for this James Bond continuation novel, than attract new female readers, I fear), but I do like the style. It's certainly something we haven't seen before for a James Bond cover, that I can remember. Unfortunately they still don't mention "James Bond" on the cover, which is really weird because it IS a Bond novel, even though it's told from a different perspective and 007 is only a secondary character. I think that the presence of James Bond is definitely the strongest selling point for this book, so it's almost criminal that they don't mention it on front if they want to generate sales. There is still no US publication date for either Moneypenny Diary. A third and final volume is planned for fall release in the UK. Additionally, Weinberg also penned two Moneypenny short stories (in Tatler and The Spectator) which saw publication around the release of Casino Royale in theatres. The paperback of Guardian Angel is due out July 12 in England.
UPDATE: Young Bond Dossier is now reporting that this is not the final cover artwork, so despite the Amazon listing, it's possible it could still change.
Posted by Tanner at 12:34 PM