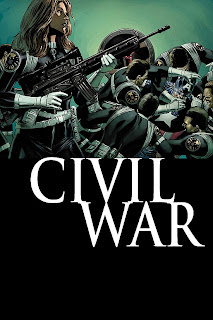 Nick Fury in Captain America
I originally wrote this post sometime back before Christmas, but for some reason never got around to putting it up. Due to Marvel’s wacky scheduling and delays resulting from the "Civil War" storyline, though, I don’t think there’s been a new issue of Captain America since then, so it’s still fairly relevant and I’ll post it now:
Despite being "underground" throughout the events of Marvel’s big, stupid "Civil War" event, Nick Fury still manages to play a key role in Ed Brubaker’s Captain America series. Even without being physically present, the eye-patched super-spy has dominated the last several issues (#22-24) and appeared as a hologram and as a robot of himself, which he controls from afar. Yes, the Marvel Universe is still a sillier place than even 007's realm, but Brubaker plays it all straight. His run on Captain America has been stellar, and his approach has been to turn the comic into a spy series. With all the dangerous politicking going on behind the scenes at S.H.I.E.L.D., Bru’s actually doing a better job with the "Queen & Country with superheroes" concept than Q&C creator (and former Brubaker co-writer on Gotham Central) Greg Rucka is with his CheckMate at DC. Of course, thanks to introducing Nick Fury and SHIELD back in the Sixties to cash in on the Bond fad, Marvel’s got a richer spy lore to play with than DC.
Brubaker’s even transformed sometime Captain America girlfriend and SHIELD agent Sharon Carter (aka Agent 13) from a supporting player to a plucky, Tara Chace-ish heroine in her own right. If you like spy comics but don’t normally venture into superhero territory, I’d really recommend picking up Brubaker’s Cap run in trade paperbacks. Despite the costume, it’s much more of a Tom Clancy style espionage series than a crime-fighting tights and capes series. In other news for Nick Fury fans, shortly after I complained about the relative lack of Nick Fury toys (compared to other Marvel heroes), my friend gave me a tiny Fury figure that comes as part of some sort of Marvel dice game. I have no idea how the game works, but the little figure’s pretty cool, like a miniature version of the Marvel Legends figure from a few years ago, complete with jetpack.
Posted by Tanner at 11:38 PM