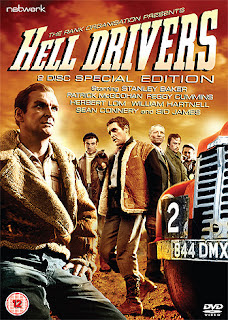 Before They Were Spies

UK distributor Network released the gritty 1957 trucker noir Hell Drivers on Region 2 DVD this week. No, it's definitely not a spy movie (not even close!), but it has more than enough spy connections to warrant a mention here. For one thing, tough-guy star Stanley Baker is supported by a gaggle of future spy stars. Secret Agent Patrick McGoohan, Man From UNCLE David McCallum, Professional Gordon Jackson, and Double-O man Sean Connery round out the ensemble. For another, it's co-written and based on a story by John Kruse, who would go on to write for The Saint, The Protectors, The Persuaders and Return of the Saint, as well as penning the screenplay for Roger Moore's zippy pre-Bond spy flick Crossplot. Like most recent Network releases, this 2-disc affair is packed with bonus material including an audio commentary, interviews with Baker, documentaries, a whole Danger Man episode, and Who Killed Lamb, a well-regarded 1974 teleplay starring Baker.
Posted by Tanner at 10:13 PM