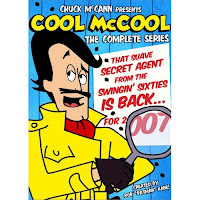 Review: Cool McCool (1966)
BCI’s new release of this Sixties cartoon (on their Ink & Paint imprint) is a real find for animation enthusiasts, but likely to bore the uninitiated. Cool McCool is a Maxwell Smart-ish bumbling, mustachioed secret agent whose gadgets–and very existence–clearly owe a debt to James Bond, but whose look comes more from the previous incarnation of "spy": a trenchcoat instead of a tux. The packaging plays up the spy aspects of the series (Cool’s magnifying glass just happens to illuminate the last three digits in "[Cool’s] back for 2007!"), but the series’ best attributes are more likely to appeal to fans of classic cartooning than spy fans.
Like Inspector Clouseau, Cool is incompetent and succeeds only by accident. His catchphrase comes when he assures his unseen, cigar-smoking, M-like boss, No. 1, that whatever embarrassment he’s just perpetrated "will never happen again!" After which, of course, it always happens immediately. The animation is actually very impressive for the era, looking more like DePatie-Freeling’s theatrical Pink Panther cartoons than Ralf Bakshi’s barely-animated Spider-Man series (the one where his spider emblem only has six legs because it’s simpler to draw that way!) that aired on TV around the same time. The backgrounds are spare, but beautifully painted, the character designs are creative, and their movement is impressively fluid. There are even a few avant-garde touches, like the occasional use of photographs amidst the animation (such as a wall of actual pin-up girls displayed on wanted posters).
After an overlong title sequence that takes up a big chunk of each episode 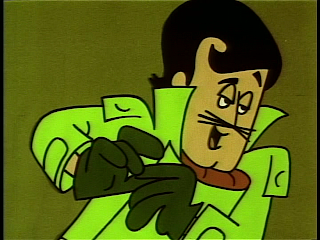 and unnecessarily introduces every villain in a rather lackluster theme song, episodes are divided into three self-contained segments. (So amidst the twenty episodes in the set, you actually get sixty shorts in total. Not bad!) The first features Cool, the second his dad ("my pop the cop"), Harry McCool, and his bumbling Komedy Kops (Tom and Dick, har-har), and the third Cool again, sometimes with a child sidekick (his son?) named Breezy. The Komedy Kops shorts recycle old Keystone Kops routines and animation gags that were already old when these originally aired in the Sixties. My advice is to skip them altogether and just watch the considerably funnier Cool McCool segments. (A very well-designed menu conveniently allows you to do just that, presenting each segment as its own selectable chapter.)
Many of the jokes in the Cool segments come from his gadgets. In one, Cool can’t figure out if the ringing he’s hearing is coming from his watch phone or his pencil phone or his mustache phone. Turns out it was coming from his TELEphone! In another, one of the series’ most inspired gags, the Q character, Riggs, comes into No. 1's office to outfit Cool with a new invincibility spray. Sprayed head-to-foot, Cool is put into a "punishment box" to test it. The spray evidently doesn’t work, and the box beats the crap out of Cool with its cartoon thrashers. Poor Riggs starts crying at his failure, and No. 1 comforts him. When Cool finally stumbles out of the box, battered, No. 1 chastises him for disregarding poor Riggs’ feelings!
When Cool gets in his car, he goes through a checklist: "Let’s see if I’ve got everything... machine guns... tear gas...smoke screen... and my LICENSE TO KILL! If only I had a license to drive!" And off he goes with little concern for the well-being of pedestrians. (His license to kill has a large skull and crossbones on it!)
Cool McCool may be most famous for its rogues’ gallery, for which creator Bob Kane basically recycled his best (and 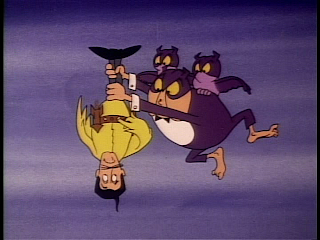 worst) Batman villains under new names. Instead of the Joker, there’s Jack-in-the-Box; instead of the Penguin, there’s the Owl, etc, etc. The quality of any episode basically depends on the villain. If you get an Owl or Rattler episode, it’s likely to be good; if you get Hurricane Harry or Dr. Madcap, not so much. They’re just silly, much more "cartoon" than "spy" or "comic book," and unlikely to entertain anyone older than eight. Rattler and, especially, the Owl, though, are more adult-friendly parodies with cleverer, funnier schemes. (The funniest episode finds Cool disguising himself as a bird to infiltrate the Owl’s gang of criminal fowl.) The Owl’s sidekick is a Catwoman clone named (of course!) Pussycat.
In addition to presenting very nice transfers of such old and relatively obscure material, BCI also pack this set with special features, most featuring animation voice legend Chuck McCann. Commentary moderator Wally Wingert estimates with little exaggeration that McCann is responsible for 90% of the voices on the series (which only employed three voice actors), though he does not play Cool. The commentary on the pilot is basically a good, informative interview between Wingert and McCann, but it’s not really screen-specific. They get way off topic early on and talk about all sorts of things, paying little attention to what’s going on onscreen. McCann on McCool is an interesting on-camera conversation between the same two participants. You’ll hear how McCann creates his character voices as "hybrids" of impersonations, like Sydney Greenstreet and Jack Benny–unless you’re too distracted by Wingert’s alarming Weird Al hair. (Perhaps Wingert should have remained off camera...)
Chatting With Chuck is a close-quarters gathering of twenty or so friends and "famous" fans of McCann’s (like Bob Denver’s son) moderated by the ubiquitous Wingert. It’s a career-spanning retrospective that covers more ground than the previous features and includes extended old TV clips of McCann, as well as a brief puppetry demonstration. Finally, we have one of the strangest special features I’ve ever seen on any DVD, a music video called "The School of McCool." It appears to have been shot in the early Nineties and features Wingert (looking like Dante from Clerks and dressed in an off-color McCool costume) singing about how muc 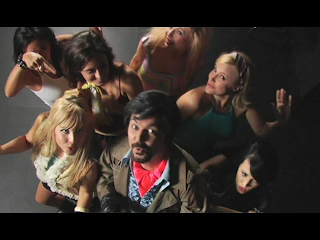 h he likes McCool. Even though it’s clearly low-budget, it’s also clear that a lot of work actually went into this. There are go-go dancers, and sets (sort of) and even a kooky guest appearance by (you guessed it) Chuck McCann. WHY WAS THIS MADE???? What purpose could it have possibly served? It is SO WEIRD! But its utter strangeness also makes it a must-see clip, of course. There are also trailers for dozens of other eclectic Ink & Paint releases, and they’re all entertaining in their own right. Anyone with fond memories of Eighties (or earlier) cult cartoon shows like He-Man and She-Ra should definitely check them out.
While dedicated followers of Sixties animation shouldn’t hesitate to pick up this inexpensive, feature-packed set, regular spy fans will probably be satisfied with just a taste. Queue up a disc on Netflix and see if you like it before committing.
Posted by Tanner at 12:36 AM