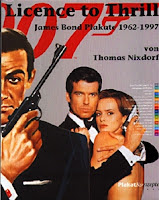 Random Intelligence Dispatches For March 29, 2007
Classic Bond Posters Covered
CommanderBond.net has published an excellent interview with the author of the German tome, Licence To Thrill: James Bond Posters 1962 - 1997. Nixdorf's book pre-dated Tony Nourmand's English language James Bond Movie Posters: The Official 007 Collection. While I can't comment on the sparse text, not speaking German, the pictures in Nixdorf's book are excellent and he offers many that can't be found in the later book (which has the advantage of being able to include Never Say Never Again and the '67 Casino Royale). Both are essential to the 007 poster afficianado. Anyway, Devin Zydel's interview with Nixdorf is very interesting and collectors should definitely give it a read.
Sandler To Star In Spy Movie?
I don't know how much of a spy movie it will actually turn out to be, but Adam Sandler is playing a Mossad agent in his next film, You Don't Mess With Zohan. According to The Hollywood Reporter, Sandler's character "fakes his death so he can move to New York and become a hairstylist." Dennis Dugan directs, and Rob Schneider co-stars. If that doesn't sound very enticing to you, consider that the script is co-written by comic genius Judd Apatow (The 40 Year Old Virgin). Could be another funny spy comedy...
Posted by Tanner at 11:26 AM