Review: Espionage In Tangiers/Assassination In Rome

Dark Sky’s "Drive-In Double Feature" DVD of Espionage In Tangiers and Assassination In Rome elevates two so-so Eurospy titles into a must-buy package by giving them an excellent presentation. Everything about the disc is classy, from the two top-notch widescreen transfers–both sourced from pristine-looking prints–to the creative "virtual drive-in" programming. Dark Sky is hardly the first company to hit on this concept (Something Weird’s been doing it for years through Image), but the inclusion of vintage trailers, advertisements and concession jingles really spruces up a double feature disc. No, they’re not featurettes exclusively relating to the movies at hand, but using public domain material to recreate an evening at a drive-in circa 1966 is a relatively cheap way to make the viewing experience a lot more fun. 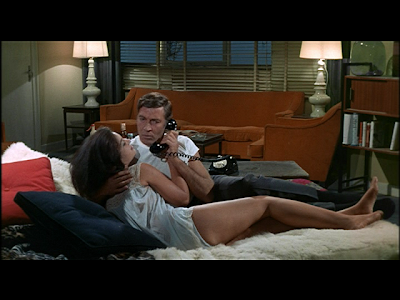 From the main menu you can only select to play the whole double-feature, but if you return to the menu after selecting that option you’ll have the choice of watching either movie on its own. If you’ve got the time, though, I recommend opting for the whole experience. You’ll start out with some decidedly non-mouthwatering shots of hamburgers and hotdogs, originally intended to pique your appetite for over-priced concessions, then get some trailers (roughly period-appropriate, but chosen more to advertise other Dark Sky discs) for Hellfire Club (with Peter Cushing!), Frankenstein vs. the Space Monster and The Horror of Party Beach. Then comes the first feature, Espionage In Tangiers.

This version runs over one hour and thirty minutes, which means that it’s considerably longer than the roughly sixty minute version reviewed in The Eurospy Guide. So if you have an old gray market copy, you 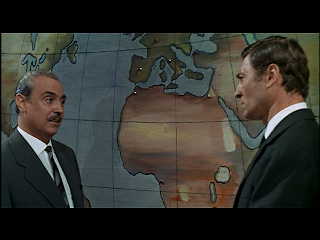 might want to upgrade and see whatever it is you’ve been missing.

Espionage In Tangiers is a typical, low-budget Bond wannabe (along the lines of Secret Agent Super Dragon), starring a typical, low-budget Connery wannabe (Luis Davila) as secret agent Mike Murphy. It’s got a good whistled theme, but not enough music in general. Long segments seem even longer without a catchy score to accompany them. And a catchy score can go a long, long way in a Eurospy movie! Espionage In Tangiers certainly could have used more.

For the Macguffin, a brilliant scientist has invented a ray (yep, rays again!) that can disintegrate anything. At least we’re told it can disintegrate anything; all we ever actually see it disintegrate is a car and a fireplace. (Yep, a fireplace. Not even the whole hearth!) Before he can deliver it to the UN, who will supposedly use it for world peace, it is stolen. In an elaborate opening sequence, each party involved in the theft is eliminated by their higher-up until the ray gun gets to a mysterious figure, leaving a trail of corpses behind. 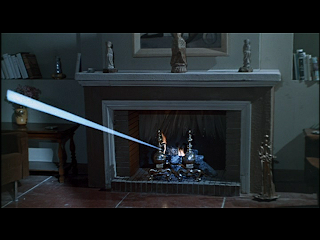 We then meet our hero in a Bond-like introduction, making out (rather poorly, from the looks of it) with a beautiful girl. (He is wearing a decidedly un-glamorous white undershirt.) He’s summoned to a briefing, and soon turns up late in the kind of suit Connery used to wear. Whatever spy agency he works for, they can’t afford a Moneypenny, so he barges right into his boss’s office, which consists of three rather flimsy-looking walls, a table, and a particularly lumpy map whose continents seem rather misshapen and whose borders aren’t defined, which you’d think would be essential for a secret service. (It looks as if the art director drew this map from memory.)

Soon Murphy’s off on his mission to recover the disintegration ray, and look out, stewardesses! I feel sorry for stewardesses in the Sixties, constantly being hit on by all these cheesy Eurospy types. It must have been really annoying. At least Mike Murphy isn’t as sleazy as Joe Walker!
The flight takes him to Tangiers, where, true to the title, we do indeed get some espionage. Right off the bat someone shoots him in the heart at the airport. Wow! How did he survive? You brace yourself for som 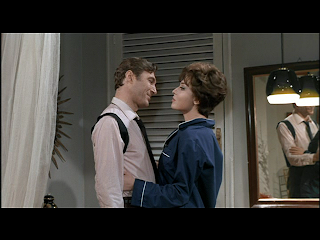 e cool gadget or amazing trick, but it turns out he just happened to have a Bible in his chest pocket. (And he really doesn’t strike me as a Bible-thumping kind of guy.) It’s really quite disappointing, but it helps you readjust your expectations for the movie. They’re not out to break any new ground here, just to tread the old ground in a fairly competent, low-budget manner. This means some decent fights, but no real action. When the bad guys speed away in a car, Murphy spots a convenient motorcycle. Does that mean we’re in for a chase? Nope. In this movie, a motorcycle is just a means of getting from A to B, not for doing stunts. We cut to Murphy arriving at B on the bike, presumably having followed them without incident.

At least we get a pretty cool fight at B. Murphy enters a warehouse full of coffins, and bad guys start emerging from them! It’s a nice, Avengers-ish moment, though it doesn’t take too long for him to beat the crap out of them all. He snoops around Tangiers some more, giving us some very nice location photography, all the more stunning thanks to the high quality of the print. Unfortunately, the mystery villain seems to specialize in killing his own men, so every time Murphy gets ahold of one, he dies before he can tell him anything useful in advancing the plot. When he finally does manage to capture a baddie, our hero reveals himself as something of a proto-Bauer, happily torturing the information out of him. The information in question leads Murphy and his espionage out of Tangiers just halfway through the film, and into Nice, another beautiful location. In Nice we do get an actual car chase, and it’s well-shot if not overly exciting. We also get some beautiful women, but the banter never rises above "you’re the sexiest spy I know!" Murphy’s proclivities for aggressive information-seeking extend to the fairer sex as well, and some slapping turns into foreplay as the "sexiest spy" succumbs to his rather... subtle charms.


Ultimately, if I followed the plot correctly, the mission turns out to be pretty pointless in the end, with very little accomplished. That’s how the whole movie feels as well. The most memorable setpiece finds Murphy trapped in a chamber slowly filling up with water, but the villains change their minds at the last minute and he doesn’t even have to escape it himself. Again, what was the point? Other memorable moments include a surprisingly brutal (for the time) torture scene in which a wire garotte is tightened around a man’s belly, and a good fight at the end on a rocky beach location reminiscent of a better Eurospy movie, Special Mission Lady Chaplin. Ultimately, though, neither scene served too much purpose. The whole movie was perfectly decent to watch, and even occasionally entertaining, but very low on nutrients, like a tolerable appetizer that leaves you still hungry for more. And luckily, that’s exactly what it is, because there is more: a whole second feature still to come! 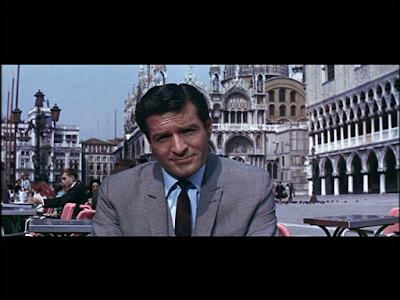 True to drive-in form, we get some more previews before Assassination In Rome gets underway, including one for Mario Bava’s Kill, Baby, Kill!, which Dark Sky was supposed to release this month, but has apparently been cancelled or postponed. Then the main feature starts up, and it’s once again a beautiful print (until the last couple of reels, at least, which have a few brief problems).

Assassination In Rome stars Hugh O'Brian (cut from the same cloth as Rod Taylor) as an intrepid American reporter based in Rome and Cyd Charisse (kind of wooden, but perfectly acceptable in a role that demands very little) as his old flame whose husband has gone missing. The spy element only comes into play in the third act, and even then it’s minor. The hero works for a newspaper, not a government agency (which fortunately means he doesn’t have to be a sleazy James Bond clone), and the story has a lot more in common with early giallo films, like Bava’s The Girl Who Knew Too Much, than with any contemporary Eurospy films. Like most gialli, it takes a lot of inspiration from Hitchcock, and also from the first-rate Hitchcock imitator, Charade (Stanley Donen, 1963). It does, however, deliver the same great locations (Rome and Venice), fancy cars (Alpha Romeo), treachery and duplicity and even, eventually, gunplay we expect of a Eurospy feature, all to the beat of a superior score by Armando Trovajoli.

Unlike the first feature, Assassination In Rome has an actual plot that moves forward and makes sense, even if it sometimes drags a bit. The colorful and well-shot footage of Rome is enough to recommend it to Europhiles, and some of the characters (like an exiled Mafia don) are just as colorful. The costumes are interesting, to say the least. I can’t write about this film without noting some truly bizarre hats, especially one worn by the mysterious Lorena towards the end.

Overall, your enjoyment of Assassination In Rome is likely to depend on how much of a giallo fan you are. The conclusion is pure giallo, and features several elements that will come to be clearly identified with that genre a few years later. There’s one of those chases up an endless staircase, and a masked killer whose true identity turns out to be very much a giall 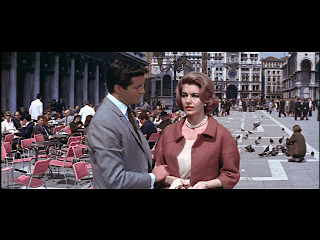 o convention.
I enjoyed the second feature a bit more than the first, but neither leaves a real lasting impression. The overall presentation, however, does. Dark Sky have put together a very nice package with excellent transfers of two obscure movies and a fun gimmick holding them together. I hope they choose to revisit the Eurospy genre in future "Drive-In DVD" releases. Budget-priced at under $12, they certainly provide good value for your dollar. And, despite my criticisms, if you're at all a fan of Sixties European thrillers, you'll eat this stuff up.

I do have one question, though: Espionage In Tangiers is supposed to be George Lazenby's first movie, and he's even credited on the back of the box (though not in the movie). I know his part is tiny, but I never spotted him, even for an instant! Does anyone know where he turns up?
Posted by Tanner at 1:02 AM