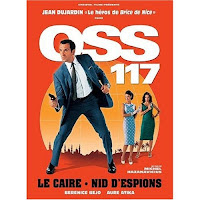 Review: OSS 117: Cairo Nest of Spies (2006)
Ever since reading a review in Variety sometime last year, I’ve been hoping and hoping that OSS 117: Cairo Nest of Spies would get a North American theatrical release. Sadly, that hasn’t come to pass, so I took some advice on the Eurospy Forum and ordered the Region 1 DVD from Amazon.ca. Ordering directly from Canada works out to be much cheaper than shelling out fifty bucks for the import and then waiting six weeks to get it from Amazon.com. I had never seen any of the straightforward Sixties OSS 117 movies (although I do enjoy the soundtrack CD), but was still looking forward to seeing a modern spy movie shot as if it was from that era, even if the new movie was a spoof rather than the real thing.
Director Michel Hazanavicius's OSS 117: Cairo Nest of Spies resurrects novelist Jean Bruce’s titular hero as a comedic version of himself–as well as of James Bond and countless other Eurospy types. As played by Jean Dujardin, OSS 117 (aka Hubert Bonisseur de la Bath) comes off as a slightly more competent version of The Pink Panther’s Inspector Clouseau. His competence comes in his fighting abilities, though, not in deductive reasoning. He represents everything that’s worst about the West and about colonialism, primarily in his total ignorance to other cultures. He laughs at the Arabic language and dismisses Islam as a f 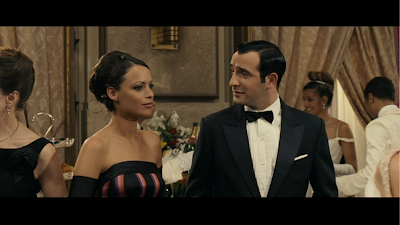 ad that will never catch on. He’s hopelessly patriotic, believing his own government can do no wrong at all; he carries around pictures of French president Coty and distributes them to various Egyptians he meets. Dujardin’s version of OSS 117 is a clever comedic creation, smoothly sending up the annoying smugness and utter arrogance of all the Eurospy heroes of the Sixties. And he's got the crucial "spy eyebrows" down pat!
His mission takes him to Cairo, naturally, to investigate the disappearance of his predecessor and childhood friend, Jack. In Cairo his cultural obliviousness sidetracks him again and again, and it’s only with the aid of his beautiful local contact Larmina (Bernice Bejo) that he manages to get anything done. Despite her help, he still manages to offend her, her people and her religion time and again.
On one level, the mo vie is a sharp satire on global politics and Western ignorance, sending up the culture of the "Ugly American," even if it does so with a Frenchman instead. But on another level, it’s a rather silly slapstick spy farce. This ultimately impedes its success as a biting satire, because it dulls the blows with pratfalls, but the lighter tone is to the movie’s advantage. It comes off as a daft, enjoyable comedy that actually makes a few good points if you stop and think about it, but certainly doesn’t hit you over the head with them.
The biggest laughs come from those moments of sheer silliness. Bath becomes obsessed with the poultry business that serves as his French Secret Service cover. When the lights go on, the chickens all start clucking madly. When the lights go off, they shut up. Fascinated by this behavior, he amuses himself over and over again by flipping the light switch on and off. It doesn’t sound like much on paper (or computer screen), but it’s a very effective gag, especially as a call-back to punctuate another character’s remark that Bath is either "very stupid or very smart."
The production values are impressive all-around, and do a good job mimicking technicolor films of the Fifties and Sixties. They incorporate grainy stock footage and obvious models, as well as rear projection, plenty of Brill cream, a suitably retro score (though not as good as Michel Magne's original OSS 117 themes) and cool studio-bound sets. The best of those sets is a Neo-Nazi enclave hidden inside a pyramid and decked out with the requisite swastika flags, as well as an array of security monitors that use a new technology to record their fe 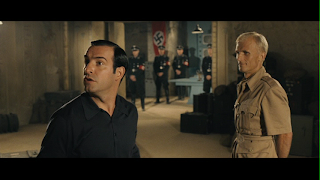 eds onto magnetic tape. (Appropriate, since Eurospies were always on the cutting edge of technology. We may still not have a disintegration ray, but at least VCRs have come and gone!) OSS 117: Cairo Nest of Spies doesn’t do as good a job of replicating period production values as, say, Todd Haynes’s fantastic Far From Heaven, or Steven Soderbergh’s The Good German, but it does so well enough to add another layer of amusement.
If that idea particularly appeals to you, or if you are a big fan of the (original) Pink Panther films then you may want to import this DVD. Otherwise, you might as well save your money for now and wait for a more affordable domestic release, which is sure to come eventually... Right? I certainly hope so! Thanks to the film’s staggering success overseas, a sequel is already in the works. If the first movie has at least gotten a home video release here by then, then perhaps it will prove slightly easier to find in theaters in les Etats Unis.

The Canadian DVD is a handsomely-packaged two disc set. It comes in a digipak with a sheet of stickers promoting the movie. (An odd but welcome extra.) Disc 2 contains the special features, including theatrical trailers and an interview with star Dujardin and a making-of. (Other regions apparently got a more in-depth documentary and deleted scenes.) Unfortunately, the special features don’t have English subtitles, and my French isn’t so good, so I didn’t get much out of them. Another reason to cross my fingers for an eventual American release!
Posted by Tanner at 11:53 PM

It finally got an Australian cinema release for the French Film Festival - 'one night only.'

The French DVD comes with a Rene Coty postcard, like the souveneir card used throughout the film. I got a chuckle out of that.

I am pleased to say that it will get an Australian DVD release on the 6th of June this year. By the AV Channel ) could be in conjunction with Madman or Umbrella?

It also claims to have similar special features. I wonder if they will go to the trouble to subtitle them?

I'm glad to hear it's coming out in Australia. If Umbrella's involved, then I bet they will subtitle the features. They're usually pretty good with features. Please let us know if you get it!

It did get at least one festival date in the US, too, somewhere in the Northwest. Nothing in Los Angeles, sadly.

This was recommended to me on Netflix.

I never heard of this movie but i loved it. Nice review

I was amazed that this one is actually available in Australia. So it's been added to my rental queue. Although Region 4 DVD releases can be rather dodgy.