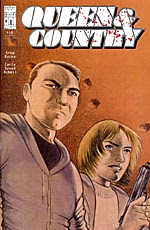 Greg Rucka On The Future Of Queen & Country

Greg Rucka recently did a great interview for the Word Balloons comics podcast and discussed, among many other topics, the future of his sublime but frustratingly-MIA-of-late spy series Queen & Country. And it's mostly bad news, I'm afraid.

On the plus side, he says the final issue of the current arc of the comic series, "Operation: Red Panda," should be out "hopefully in next three months or so" (Publisher Oni's website says June 15... so, fingers crossed!) On the minus, he goes on to reveal that "we're probably going to put the book on hiatus between Volume 1 and Volume 2 for I would think no less than 18 months, possibly in the neighborhood of three years." So there you have it, Queen & Country fans. Prepare to wait three years before the next comic book storyline! (Hopefully there will at least be another novel in the meantime... more on that later.)

Of course, Q&C fans are used to waiting (it's been nearly six months since the last issue of "Red Panda"!), so maybe the hiatus won't be much different from the ongoing series in the last few years. The word "hiatus" just sounds so final that it makes me cringe. Rucka is apologetic ("I am not proud of [the delay]. And I think that if there's fans out there who are pissed off, I can't blame them, because it's not a fair way to treat the audience.... I've made them wait a really long time."), but he does offer some good excuses. Part of the reason for the delay is that Nicola Scott, the artist attached to the beginning of Vol. 2, is currently occupied on DC's Birds of Prey.

Another reason is intrinsic in the story he’s telling. Since the missions in Q&C are tied into real world events, he’s not free to just jump ahead several years at will—and that’s exactly what he’d like to do. At the moment heroine Tara Chace’s daughter, Tamsin, is still a baby, which Rucka feels makes her more of a prop than a character. He feels that waiting a few years will give Tamsin a chance to grow into a more interesting age.

In the meantime, we can expect a new ongoing comic book from Rucka and Oni to be announced at this year’s San Diego Comic-Con (“a different genre, but related”) and another Queen & Country novel… eventually. Rucka says he’s not ready to write that one yet because it requires a lot of research… and travel. That means it won’t be his next book, but it will probably still happen before we see more issues of the comic. Rucka doesn’t address the Tara Chace: Declassified mini-series that was announced a few years ago but never materialized.

He does talk at length about writing the Q&C novels and how that’s different from writing the comic, and about the TV series that inspired the whole series, The Sandbaggers. Make sure you tune into the podcast to hear his thoughts on that, along with his own intriguing theory about the mysterious disappearance of the show’s creator, Ian Mackintosh. You can also hear him talk candidly about all his other comics projects, including DC spy series CheckMate, and lots more.

Listen here to hear the rest!
Posted by Tanner at 1:51 PM