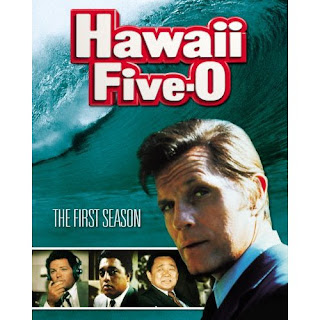 Review: Hawaii Five-0: Cocoon
I certainly don’t think of Hawaii Five-0 as a spy show, so I was surprised to discover that the 1968 pilot movie which spawned the series owes much more to the Sixties spy genre than the age-old cop formula.* I guess it should seem natural. CBS had, after all, a location far more exotic than the average police drama (most of which were set in Los Angeles) and a star best known for playing 007's American counterpart, Felix Leiter, in the debut James Bond movie. (It really is a shame the producers opted not to bring Jack Lord back for Goldfinger... He was a much better Felix than Cec Linder!) So why not tell a spy story?
Cocoon follows the exploits of Steve McGarrett (Lord), the maverick leader of Hawaii’s elite State Police unit, Five-0. Although his team is mostly in place (the glaring exception being James MacArthur as Danno), this TV movie rests squarely on the shoulders of Lord. Luckily, he’s a natural leading man, fully capable of carrying such a movie–or series. If by-the-book Joe Friday was still the model policeman on TV at the time, then McGarret seems to owe more to James Bond, Harry Palmer and the other, more loose cannon, lone wolf spy heroes of the era. The first bad guy we see him encounter, he shoots dead rather than arresting, and he refuses to allow himself to be outranked by the American Intelligence station chief (a still-dark-haired Leslie Nielsen).
McGarrett encounters the spooks in the course of his investigation into the murder of his friend, who was also a spy. He discovers connections between his friend’s death and the deaths of several other American agents, incurring Nielsen’s turf war warnings to back off. But, apparently, McGarrett never backs off. ("He only takes orders from the Governor and God... and occasionally even they have trouble!") He is in fact so impressive in his tenacity that the head of Intelligence himself flies to Hawaii and recruits the state police officer to take on the most dangerous mission he has. (So much for credibility.) And so off McGarrett goes, deep undercover to flush out the nefarious Wo Fat, a Bond baddie-type Red Chinese agent.
In a plot reminiscent of The Ipcress File, Wo Fat has perfected a "brain drain" technique to make every American agent he captures talk. Of course, the diabolical mastermind meets his match in McGarrett, who proves strong enough to withstand the elaborate technique that broke even the most hardened secret agents (a technique too convoluted to explain here, but it somehow involves the titular cocoon) and even uncovers a traitor along the way. Wo Fat gets away and lives to antagonize McGarrett for another eleven seasons, but McGarrett gets his fight-to-the-finish with the American turncoat as the heavily armed 5-0 team swarms the ship where he’s being held in a finale reminiscent of Goldfinger, Thunderball and You Only Live Twice. Also in 007 style, he ends up romancing the beautiful Nancy Kwan (Wonder Women, The Wrecking Crew).
Unfortunately, a limited TV budget at the time could do little to replicate those blockbusters, and lacking the creativity of the Eurospy brand of Bond-on-a-budget, Cocoon falls a little short of the mark it ambitiously sets for itself. The plot feels bloated at two hours, and there aren’t enough bang-up action scenes to sustain that kind of runtime for this kind of story. Perhaps a spy yarn was the wrong approach to take for the pilot, because Hawaii Five-0 quickly comes into its own when dealing with more conventional police action in an hour-long format, anchored by the ever-charismatic Lord. Seen by itself, Cocoon comes off as a sub-standard spy movie, but that’s an unfair representation of what’s really a very well-done, above average cop show. (Of course, this being a spy blog and not a cop blog, my review will stop with the movie.) The famous music, however, is first rate from the very beginning, and CBS/Paramount does a good job with the DVD transfer.
*Actually, my surprise had somewhat abated by the time I sat down and watched the DVD, as Brian Flagg had already given the heads-up on the Avengers forum.
Posted by Tanner at 12:08 AM