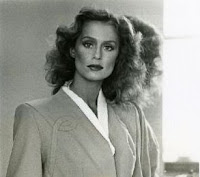 Universal's repackaging of the first two Bourne movies (due July 21) won't be their only DVD release timed to cash in on the theatrical bow of The Bourne Ultimatum. Coming the following week on July 31 (according to The Digital Bits) will be Robert Ludlum's The Rhinemann Exchange. Actually, I had no idea that one had ever been filmed. (That's one of the many great things about Robert Ludlum: not only does he continue to produce an amazing amount of new books long after his death, but long-forgotten movies and mini-series of his older ones keep turning up!) This is a 300-minute mini-series from 1977, which originally aired as part of "NBC's Bestseller." It stars a particularly ecclectic cast including Lauren Hutton, Jose Ferrer, John Huston, Roddy McDowall, Larry Hagman and 7th Heaven star Stephen Collins. (No, I never thought I'd ever have to mention 7th Heaven on this blog either.) I never read The Rhinemann Exchange, but having read plenty of other Ludlums, I have a pretty good idea of what to expect. (Though frankly I always preferred Ludlum's contemporary stories to his WWII ones.) Anyway, Amazon reviewers seem to like it.
Posted by Tanner at 7:58 PM