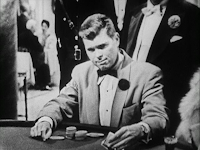 Barry Nelson, the first actor to play James Bond on screen, has died at 86.* CommanderBond.Net reports that Nelson passed away while traveling in Pennsylvania on April 7, 2007. Nelson starred as an Americanized "Card Sense Jimmy Bond" in a black and white 1954 live TV version of Ian Fleming's first novel, Casino Royale, for CBS' Climax! Mystery Theater, meaning that he preceded Sean Connery by nearly a decade.
In the teleplay, Bond's contact, "Letter" (first name: Clarence) works for British Intelligence instead of the CIA, and Vesper Lynd is replaced by "Valerie Mathis" (Linda Christian), combining the characters of Vesper and the male Rene Mathis into one. Peter Lorre plays Le Chiffre, and at least the gambling part of the plot is about as faithfull to the book as any of the three filmed versions. Nelson's Royale is included in its entirety (well, mostly--they cut off the live blooper where Lorre, supposedly dead, stands up before the camera stops rolling) as a bonus feature on the Region 1 MGM DVD of the 1967 Casino Royale, and is certainly worth seeing once for any Bond fan.
Barry Nelson's later credits include Stanley Kubrick's The Shining (in which his hotel manager gives Jack Nicholson his fateful caretaker job) and a memorable guest spot on Magnum P.I., among other things. His historical contribution to the most successful spy franchise of all time ensures that he will live on for a long time to come.