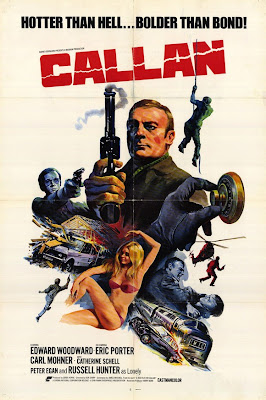 Callan Coming To DVD In USA!

Acorn Media has sent out a press release today announcing the aquisition of more than 30 classic British mystery and drama titles from FremantleMedia Enterprises... including the downbeat Sixties spy classic Callan, starring Edward Woodward as a government assassin who takes no pleasure in his work. The gritty espionage drama is one of the key spy shows of that era still absent on DVD in America, so this is really great news! Several seasons were released in Britain, but are now out of print. The show is currently available in Australia from Umbrella, but without the fantastic extras that make their ITC releases so amazing. Today's press release reveals no further details on Acorn's plans for the title, so I don't know if they'll begin with the surviving black and white episodes (some of which I don't think have been officially released anywhere yet) or jump straight into the later color seasons. I also don't know if their deal with Freemantle includes the pilot, a 1967 Armchair Theatre episode entitled "A Magnum For Schneider," or the 1974 theatrical movie (a remake of the pilot). But I do know that we'll be getting some iteration of Callan on Region 1 DVD, and that is fantastic news!
Acorn's press release also mentions that The Rivals of Sherlock Holmes is included in their Fremantle deal. This anthology of Victorian detectives, spies and gentleman thieves includes an appearance by William Le Queux's secret agent hero Duckworth Drew, one of the first fictional spies to rely on gadgets. I don't know too much about this series (although I love the Hugh Greene anthologies of that title), but I'd imagine there are some other espionage escapades as well. And speaking of gentleman adventurers, I believe that Adam Adamant Lives! is also a Fremantle title. 2Entertain put out a sublime DVD of this Avengers rival (which Brian Clemens worked on) in England, but it would be wonderful to see it available in America as well, so I hope it's among the thirty titles!
Posted by Tanner at 10:42 AM

That's great news concerning Callan. I've been wanting to get the Region 2 releases but they aren't cheap and are bare bones.