The fall trend continues. Once again, there are tons of new spy DVDs out this week! Seriously, today is a very expensive day for spy completists. On the other hand, a lot of these are gift sets or repackaging of (mostly) previously available material, but they're still appealing. Today's column actually makes a great gift guide for the discriminating spy fan on your Christmas list! 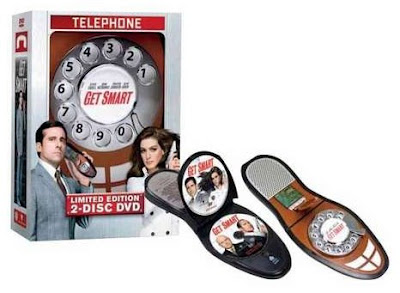 Get Smart (2008)
First up, from Warner Bros. we have the DVD debut of last summer's bigscreen remake of Get Smart, starring Steve Carell and Anne Hathaway. Despite its impressive star power, the movie itself failed to impress me too much. Surprisingly, it turned out to largely be a rehash of a previous underwhelming Sixties TV remake, I Spy (really, it's amazing how similar the two movies are, right down to The Rock playing the Gary Cole role)... with a few dollops of Rowan Atkinson's superior spy comedy Johnny English tossed in, and just a tad of the original Get Smart. It does have its moments, though, and I would have liked to see it get a better DVD. Read my review to find out what I didn't like about this so-called "Special Edition," but it's one of the more disappointing spy DVD releases of late. However, it still might be worth picking up in the exclusive Best Buy version (pictured), which reader Delmo alerted me to below. This one comes in limited edition shoe phone packaging!
Get Smart: The Complete Series
If you're more of a Get Smart purist, however, you'll be thrilled to know that the complete original series starring Don Adams and Barbara Feldon hits stores today on DVD! The set (neatly housed in cool phone booth packaging) has been available for almost two years exclusively from TimeLife's website. The retail version will still cost $199.95 (but for 138 episodes and over nine hours of bonus material on twenty-five discs, you get your money's worth), but consumers will now be able to benefit from the deep discounts frequently applied by popular online retailers like Amazon or DeepDiscount.
The Wild Wild West: The Complete Series
This one's pretty divisive among fans so far. If you don't have any Wild Wild West yet, then it's a no brainer: you get every episode of this enormously entertaining Sixties Spy/Western hybrid series, all the extras included on Season One, and the two made-for-TV reunion movies, Wild Wild West Revisited (1979) and More Wild Wild West (1980), both available on DVD for the first time with this set. If you've already bought all four seasons individually, then that's the sticking point. It's a little bit annoying that Paramount is asking the show's fans to buy everything twice if they want the complete collection. Hopefully, they'll eventually release the bonus disc on its own, but there's been no such announcement so far. The packaging is a bit odd, with all the discs separated only by thin pieces of cardboard. You can't tell which disc it is without pulling it out. I'm not sure why they didn't just bundle the original slim packs, but I guess they wanted people to feel like they were getting something special... and big. 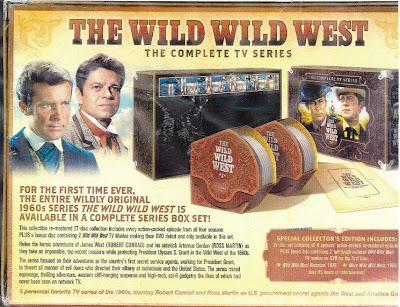 Despite the set's flaws, the bonus disc is certainly a treat. The first movie finds James West pulled out of retirement, where he's been living the Flint lifestyle with four women. His old partner Artemus Gordon quickly whips him back into shape (in one of the movie's better moments, Jim actually shaves his mustache off with a straight razor while doing sit-ups!), and the two of them hit the trail once again. (Actually, the track... and this time their train can actually be seen in aerial shots travelling through real wilderness!) The enemy is the son of their old foe Dr. Miguelito Loveless. Paul Williams steps into the shoes of the late Michael Dunn. His plot involves creating bionic people (including a "$600 man") and replacing world leaders like Quee 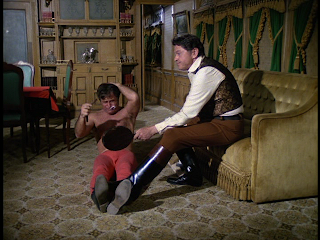 n Victoria and President Cleveland with his own doubles, Dr. Noah-style. The second reunion movie (for which Jim actually retains his mustache the whole time) features Jonathan Winters as the diabolical mastermind. 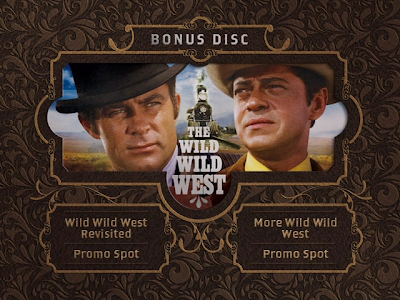 The Wild Wild West: The Complete Series is certainly something every Sixties spy fan (and particularly Avengers fan) should check out if they haven't already. 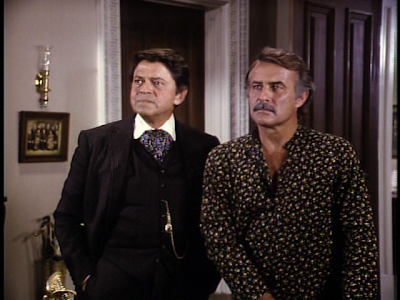 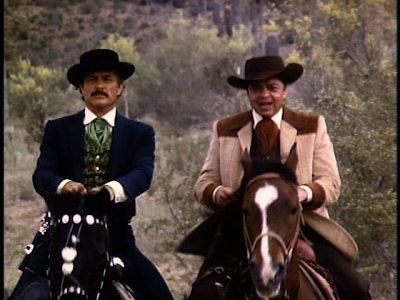 This is simply yet another new repackaging from Universal of the three Bourne movies. It's a convenient way to buy them all together if you don't own them yet, but the new set does not include the fantastic bonus disc, The Ludlum Files, which was included with previous box sets, nor the Ultimatum bonus disc included with Best Buy's exclusive version.
Flashbacks of a Fool
Finally, from Anchor Bay we have the Daniel Craig passion project which got wide theatrical release in Britain last spring, and a very limited, completely unadvertised run here in the U.S. a few weeks ago. I've wanted to see this for quite a while (owing both to Craig and the Roxy Music-heavy glam soundtrack) and I'm glad that Anchor Bay is capitalizing on Quantum of Solace by finally giving it a decent American release.
Posted by Tanner at 12:17 PM

Thanks for the shout out! Another thing to point out is that Best Buy is selling the complete Get Smart series set for $109 this week! Sorry I didn't mention that earlier.