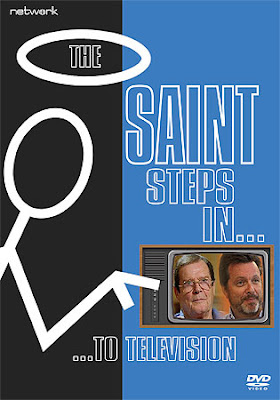 The Saint Steps In... To Television

UK company Network has announced a DVD containing just the acclaimed documentaries from each of their three Saint DVD releases edited together and expanded into a feature-length documentary. I've been salivating for this disc since reader Delmo mentioned it in a comment on my post about the since-cancelled Australian Saint documentary. When the company's first Saint set debuted, Network posted clips from the documentary on their site, and they looked amazing. A&E offered no such features on the Region 1 Saint releases. Sadly I, like many American Saint fans, I presume, was in no position to spring for a whole new set just to get the bonus features. This new DVD combines "The Saint Steps In... To Television" from Network's release of the black & white Roger Moore episodes, "The Saint Steps In... To Colour" from their set of the Moore color series (both narrated by Ian Ogilvy) and "The Saint Steps In... To the 1970s," narrated by Moore, from their Return of the Saint set (starring Ogilvy). Here's Networks own copy on what's certain to be a stellar Region 2 release:

Previously only available with the best-selling Saint and Return of the Saint DVD box sets, this series of highly acclaimed documentaries has now been revised and expanded with new interviews to form one feature-length documentary. The Saint Steps In... To Television is the definitive look at the series’ production for Lew Grade’s ITC company, as told by those involved in its creation. It covers the full story of how Simon Templar came to the small screen in the early 1960s, the series’ evolution into colour and its revamping and reformatting to fit the shifting trends of a late 1970s audience. Featuring extensive contributions from Roger Moore, Ian Ogilvy, Robert S. Baker, Johnny Goodman, Patricia Charteris and many more, this two-hour documentary is the final word on Simon Templar’s time at ITC.

The Saint Steps In... To Television is currently available only as a Network website exclusive. While you're on their site, you might also want to check out their 40% off sale on select titles, including both Moore Saint sets as well as The Persuaders! which runs through Christmas.
Posted by Tanner at 9:35 AM

"Sadly I, like many American Saint fans, I presume, was in no position to spring for a whole new set just to get the bonus features."

Speak for yourself. I bought the A&E sets first, then the Australian Umbrella sets, and the Network sets. I still need the Network ROTS set.