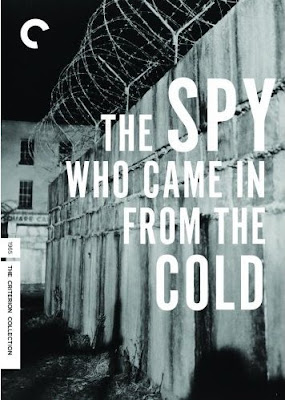 The Spy Who Came in From the Cold Criterion Edition
This one caught me completely by surprise. It somehow slipped under my radar entirely whenever it was announced, which was a serious oversight on my part, as this is one of the cornerstones of the "serious" side of the spy genre--and a Sixties classic. The John Le Carré novel was adapted by Paul Dehn, who wrote a trilogy of Sixties spy films starting with Goldfinger in 1964--as different a spy movie as you can get from this one--and concluding with another Le Carré adaptation, the underrated Smiley story without Smiley The Deadly Affair (based on Call For the Dead) in 1966. The existing Paramount disc of The Spy Who Came in From the Cold was a bare-bones affair, and not even the best transfer, so its high time this title got the treatment it deserves. Criterion provides a brand new, digitally-restored transfer and a number of extras on this two disc set including new interviews with John Le Carré and the film's cinematographer, Oswald Morris, an old interview with star Richard Burton, the theatrical trailer, a gallery of set designs, and printed essays and interviews. Best of all, though, is the inclusion of an hour-long 2000 BBC documentary about Le Carré called The Secret Centre. This sounds like an amazing release, and clearly a must-have for fans of the serious side of the spy genre.
24: Redemption
Jack Bauer in Africa! (Finally!) This is the extended version of the long-awaited 24 TV movie (formerly titled Exile) that aired on Fox this past weekend. The DVD includes all sorts of extras including a making-of documentary, a commentary track, several featurettes, a recap of the show's sixth season and a preview of the seventh--in the form of the first act (sixteen minutes) of January's season premiere.
The Pink Panther Ultimate Collection
The ultimate Christmas gift for all Pink Panther fans: The Pink Panther Ultimate Collection. This impressive box set contains a whopping eighteen discs comprising every Pink Panther movie from the original up through the Steve Martin version, including all the weird ones like Inspector Clouseau with Alan Arkin and Curse of the Pink Panther with an impressive Roger Moore performance as the second-best Clouseau, but excluding (of course) one of the series' best films, Return of the Pink Panther. Since that one was financed by Lew Grade and ITC, it's never been a part of the MGM library and is currently available on DVD on a Universal imprint. In addition to all the movies, the Ultimate Collection will also include over 190 Pink Panther cartoons! This includes the first four volumes (previously available as a set), the Ant and the Aardvark volume, and the previously available Inspector volume... as well as the previously unreleased Inspector Volume 2, Roland and Ratfink and a mysterious ninth disc! Best of all, this new set also includes a new Special Edition of Blake Edwards' original Pink Panther film, including over sixty minutes of never-before-seen bonus material, all exclusive to this set.
Posted by Tanner at 10:19 AM