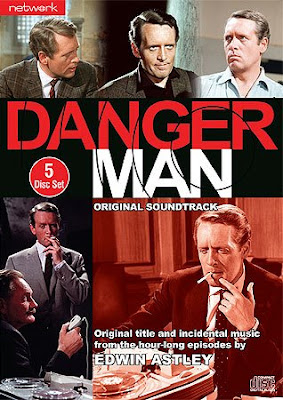 Sometimes it seems nary a day goes by without exciting spy news from Network! (Or, in this case, Patrcick McGoohan news, I guess.) Hot on the heels of their Saint DVD announcement comes news of a second volume of music from the classic McGoohan spy series Danger Man--known here in the U.S. as Secret Agent. Following their collection of themes from the initial series of half-hour episodes comes this volume of never-before-released music from the hour-long series. Nearly 400 minutes of original score material by Edwin Astley are contained on five discs. As with other Network soundtrack releases, this Danger Man set includes the same exhaustive, unmissable liner notes by the tireless Andrew Pixley.
Note that this collection presumably won't include Johnny Rivers' famous theme song "Secret Agent Man" because that was only used as the intro to the series in America, and Network's sources are the U.K. master tapes. And it's not as if the Rivers song is hard to come by!
It's traditional that I end any blog post about a new Network ITC soundtrack by reiterating both how happy I am that the label continues to produce these sets and my perpetual hope that one day they give us my own personal Holy Grail of TV music: Ken Thorne's scores from The Persuaders!
Danger Man: Original Soundtrack is a Network web-only exclusive for the time being, scheduled to start shipping November 24.
Posted by Tanner at 10:48 AM

Man, they are releasing everything but The Saint, Return of The Saint, or The Persuaders. Can I stand the strain?

A couple of the episodes included Edwin Astley arrangements of some classic Zombies songs, including a version of "She's Not There" sung in a different language. I hope these are included.

Wow. That is really cool. I just got finished not long ago watching the series on DVD. This would definitely be a great thing to get my hands on.

Danger Man has some great music. Even better than the soundtracks from The Prisoner, which were mostly library and stock music. Can't wait to get these!