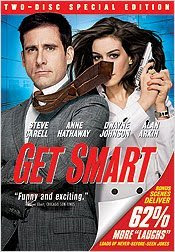 This summer’s hit spy comedy Get Smart gets an embarrassing bare-bones DVD release masquerading under a very attractive lenticular cover as a two disc special edition. Once you get past that awful Warner Bros. anti-piracy thing that pirates scenes from Casablanca, you get no features, no commentary, just the movie itself. And, of course, the highly touted "Comedy Optimization Mode." 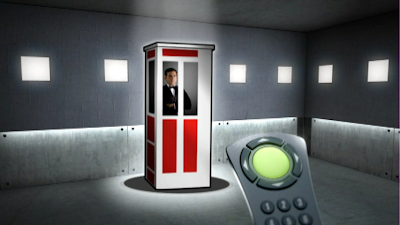 Don’t you hate navigating menus to select deleted scenes? Don’t you wish there were a less convenient way to watch them? At the same time, isn’t watching a movie on DVD too easy? Instead of plunking yourself down on your couch and just letting the movie play out, don’t you wish you had to push buttons on your remote control every couple of minutes? Well, Warner Bros. has anticipated your problem! And to solve it, they’ve devised the single most annoying way to watch a movie, and possibly the worst ever DVD bell or whistle. If you want to see deleted scenes or alternate takes, you need to select the "Comedy Optimization Mode." In an un-skippable introduction, Steve Carell explains that this makes the movie 62% funnier. It does not. It does, however, make it approximately 62% more irritating, though. Carell explains that at certain times an icon of a phone booth will pop up, you might imagine somewhat akin to the famous Matrix "follow the white rabbit" feature. When you see the icon, you can press a button on your remote and see the deleted scene or alternate take. It’s not a little icon, though. It’s a giant, ugly graphic that takes up the whole entire screen! (Pictured above in all its glory.) Furthermore, it cuts in at inopportune moments, often interrupting actors mid-word. And the alternate takes are rarely worth the inconvenience. Well, perhaps some of them would be (like the extra Bill Murray bits), but the feature was so aggravating that I gave up on it after a while. I would have preferred a simple menu of deleted material, then maybe I’d know. But you can’t access the deleted scenes any other way. Rather than "optimizing" the comedy, this atrocious featurette steps on it and frequently diminishes it. 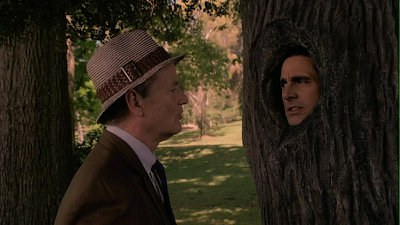 Luckily, there’s a whole second disc, right? Well, yes... but sadly far too much space on it is taken up with one of those hideous "digital copies" no one cares about, so there’s no room for proper bonus features. What we get is a 14-minute Making-of featurette called "The Right Agent for the Right Job." It’s not an in-depth documentary, but just an EPK, with everyone saying nice things about each other. It does have its moments, though, including some good footage of Anne Hathaway reading for the part of Agent 99 opposite Steve Carell. The two start improvising, and it’s easy to see why she got the role. That’s good stuff. Carell explains that he was concerned that Anne Hathaway wouln’t be hot enough to share the screen with him, which is funny at first, but then the bit goes on too long. Overall, this is a featurette more concerned with cracking jokes than telling you anything about the movie. Both stars seem surprised that the movie turned out to be an action movie, which may explain something.

An even shorter featurette, "Max In Moscow" (about filming in Red Square) played in a truncated version with commercials before movies last summer, and it’s nice to have it included, but not nice enough to justify the disc’s "Special Edtion" moniker. Neither is "Language Lessons," a silly sketch with Carell speaking made up versions of French and German and Italian to promote the DVD. It’s slight, but funny. (Fake German is always funny, and Carell–unsurprisingly–does it well.) There’s also a Gag Reel, but not really much there. Besides a few amusing Carell ad-libs and mess-ups, it’s mostly just people blowing their lines in a way that might be funny if you were on set... but not at home watching a DVD. This highlight is a brief snippet of Carell doing a Don Adams impression, indicating a possible alternate direction the movie could have gone that might have actually worked better than it sounds. Rounding out the "Special Edition" is a 3-minute promo for the DVD spinoff Get Smart’s Bruce and Lloyd Out of Control.

I didn’t care much for the 2008 version of Get Smart, but the movie did have its moments, and both Carell and Hathaway were inspired choices for the lead roles who acquitted themselves nicely. The movie had some decent spy action and some good parody, and even if the two didn’t ultimately mix that well, either one of them would have normally justified a DVD purchase. But it’s hard to get very excited about a disc this poorly conceived and executed. I hope that Warner Bros. is working on a more elaborate Special Edition to coincide with the inevitable sequel. Assuming so, it’s worth waiting for now.
Posted by Tanner at 11:33 PM

Email ThisBlogThis!Share to TwitterShare to FacebookShare to Pinterest
Labels: DVDs, Get Smart, Reviews

I haven't watched it yet but I did pick up the Best Buy version which came in cool ass "shoe phone" packaging. It's friggin' huge, though, when you take it out of the box. Whose foot would this shoe fit-Shaq?

I haven't seen that. It does sound neat, though! Maybe the DVD would be worth buying for THAT, in fact...