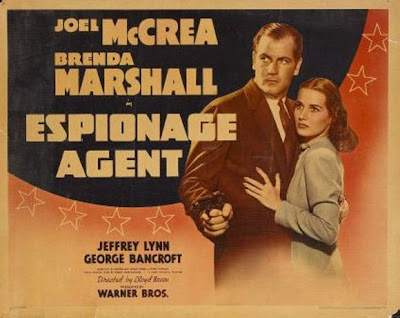 
In the days leading up to WWII, Joel McCrea made near back-to-back spy films with polar opposite political agendas. Alfred Hitchcock’s genre-defining action masterpiece Foreign Correspondent warned of the chaos brewing in Europe and made the clear case that it would be impossible for America and Americans to avoid being caught up in it, so the U.S. should make a stand soon and come to the aid of its overseas allies. (As a Brit working in Hollywood, Hitchcock himself had an obvious patriotic agenda.) Prior to that role, however, McCrea played an American diplomat in Espionage Agent, a movie that dared to vilify Hitler’s Germany at a time when studios preferred to play it safe with international politics, yet at the same time advocated America’s neutrality. "If America, lacking the protective laws it needs, is drawn into another war," one mouthpiece character declares, "it will be because of those human ostriches who keep their heads buried in the sand." While advocating isolationism, the movie recognizes its drawbacks. "Isolation is a political policy, and not a brick wall around the nation," comments another character. "And fancy pants guys [meaning spies] walk right through political policies."

Espionage Agent blames nefarious foreign spies and saboteurs for warmongering in America, ignoring all the other factors that led to U.S. involvement in the Second World War, but at the same time makes the sound case that the United States badly needs a counterintelligence agency of its own to root out those spies. That, the film’s creators naively believe, will be the end of it. As long as U.S. authorities can round up all the foreign agents operating within the country, America need have no more involvement with the war in Europe. So while it’s heart may have been in the right place, the movie’s politics have dated badly. But how does Espionage Agent fare as pure entertainment? Sadly not so well. Director Lloyd Bacon and the four credited writers had not yet cracked the genre the way Hitchcock had.

At a time when Hollywood films weren’t supposed to stir up trouble by specifically identifying the foreign powers behind the spies and saboteurs creeping all over movie screens, Espionage Agent boldly opens with headlines about German agents operating subversively on U.S. soil and Congress’s need to take action. They get away with this by hiding behind a title card that identifies these events as occurring in 1915, but the implication is clear that they’re happening again. Once we flash forward to the contemporary setting of 1939, there’s no more specific mention of Germany, though all the foreign agents speak with German accents and have names like Muller and come from a country that borders Switzerland with soldiers whose uniforms closely resemble those of the SS.

McCrea plays Barry Corvall, a U.S. diplomat in Algiers. He helps a throng of American travelers escape the revolution-rocked nation, including the beautiful Brenda Ballard (played by the equally beautiful Brenda Marshall). When he sees Brenda, it’s love at first sight. Unfortunately, we’ve just seen her agreeing out of desperation to spy for the loathsome Herr Muller (Martin Kosleck) if only he’ll furnish her with an American passport so she can get home. Barry books Brenda passage on the same steamship he’s taking back to the States, and woos her throughout the voyage. Not wanting to drag him into her own unfortunate predicament, Brenda adamantly refuses his advances.

Back in America, Barry and his friend Lowell enroll in some sort of advanced diplomat school, and learn more about the dangers of foreign spies. This section plays out like the Top Gun of the diplomatic corps; it’s clearly designed to attract eager recruits for foreign service. Barry eventually completes his higher learning and gets posted to Paris. And he finally convinces Brenda to marry him. Of course, that’s when the snake Muller emerges from the shadows, reminding her of her debt of service to his organization. Here, the movie does something surprising. It doesn’t milk the drama of a wife coerced into spying on her husband. Instead, Brenda comes clean with Barry and tells him everything. He, in turn, reveals all this to his bosses in the State Department.

I don’t know if their response accurately belies the astonishing ignorance of the pre-war U.S. intelligence community, or merely the astonishing ignorance of Hollywood’s screenwriters at telling good spy stories. Either way, instead of using this newfound asset as a double agent to pass misinformation along to the Germans, the honchos at the State Department call Muller into their office and tell him exactly what they know, blowing their chances at running any sort of counterspy operation. Muller smiles and says it’s all true, but what can they do about it? He’s a foreign citizen, so under the current U.S. law they have no choice but to let him go. Way to go, State Department; way to accomplish nothing. Yes, that’s the movie’s point, but it makes for frustrating plot development.

So halfway through the movie, we’re robbed (twice) of what could have been the compelling espionage drama promised in the film’s title. Luckily, Corvall feels just as cheated as the audience, and vows to single-handedly bust up this spy ring. Of course Brenda won’t let him go it alone, so he reluctantly accepts her help. As a private citizen, he’ll fashion himself and Brenda into a two-person CIA. And so they head off together to take on all the espionage agents in Europe, trying to gather evidence of infiltration that will force Congress to act... somehow. This private mission leads to the good stuff we expect from Thirties spy movies, like secret codes, foreign embassies, listening to conversations through windows and–of course–crossing borders on trains. But still, Barry and Brenda are dogged by America’s general lack of preparedness to function as a superpower. When Barry tries to bluff that American agents are watching all the train stations, the head German (oops, I mean head "foreign") agent snidely gloats, "Ve know America has no counter-espionage service."

Things still manage to get exciting in a kind of third-rate way, and then wrap up very suddenly against the same conditions that end Foreign Correspondent, with the world on the verge of war. It’s not giving away too much about a movie of this era to say that Barry does something worthy of praise, but sadly America is in no position to offer it. "You helped forge the weapon the service so badly needed," says his former State Department superior. "And yet the service can’t show its gratitude for it." The age-old secret agent’s dilemma: there’s no public reward for secret service. Of course, the movie itself has managed to make its very public case for an American counterintelligence agency, so it’s undeniably successful to some degree, and of considerable interest to students of spy history. Yet its creators remain blissfully hopeful that such an organization will enable the country to maintain its isolationist outlook, and steer clear of the troubles in Europe.

Espionage Agent is a curious time capsule from that moment when Hollywood was first dabbling with the notion of a secret agent hero. Spies were still shadowy villains, aiming to do America harm, but what about a counterintelligence officer, protecting the country from such threats? Barry Corvall is still a private citizen, and a cinematic James Bond is still two decades away. Despite a few anomalies during WWII, the heroic counter agent wouldn’t emerge until the Cold War, but Espionage Agent is notable as an early experiment in that direction. It’s also worth seeing for solid performances from Joel McCrea and the truly stunning Brenda Marshall, whose career was sadly never as big as it should have been. But it’s far from top-shelf spy entertainment. For that, seek out McCrea’s next spy movie, Foreign Correspondent.
Posted by Tanner at 6:23 PM