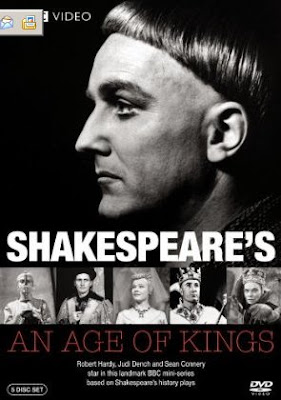 I had no idea that this was coming out! I had no idea that it had even survived the BBC's notorious policy of "wiping" tapes of old programs in the Sixties. It's not a spy movie, but it is one of the rarest, most sought-after (well, by me, at any rate... surely there are others?) early performances by the King of the Spies himself, Sir Sean Connery... as Hotspur! And, as reported by the LA Times (via CommanderBond.net), it's out on DVD in the United States today! (Courtesy of BBC/Warner.) Off the top of my head, I think this is Connery's only filmed take on the Bard. The Times offers up a brief description of Shakespeare's An Age of Kings, which was a fifteen-part BBC series compiling "eight of Shakespeare's historical plays -- all of "Richard II," both parts of "Henry IV" and "Henry V," all three parts of "Henry VI" and "Richard III" -- and spans the history of the British monarchy between 1377 to 1485." It aired in 1960 in England and 1961 in America, on public television. Like most British TV programming of its time, it was shot live on video in black and white, so don't expect Kenneth Branagh production values. Besides Connery, the series also features Bond vets Julian Glover and Judi Dench. Robert Hardy plays Prince Hal. The DVD retails for $49.98, though Amazon has it for $34.99.
Posted by Tanner at 1:11 PM