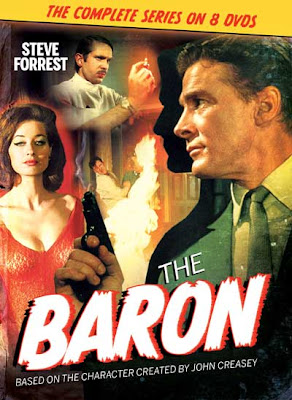 Looks like my speculation that it would be bare-bones was wrong. Next week's previously announced Region 1 release of The Baron from Koch Media will have some great bonus features after all! Unlike A&E's Saint or Prisoner DVDs, and unlike Image's Jason King, Koch's The Baron will include all the audio commentaries and audio introductions featured on Umbrella's excellent Australian release! (In a rare occurence, both versions beat out Network's UK release, which has some features but includes no commentaries.) That means American fans will get to hear Sue Lloyd and Production Supervisor Johnny Goodman talk about the pilot episode, "Diplomatic Immunity," Peter Wyngarde introduce "The Legions of Ammak," Sue Lloyd and prolific ITC director Cyril Frankel commentate on "Something for a Rainy Day," Brian Clemens introduce "The Maze," Annette Andre introduce "Roundabout," and Lloyd, Goodman and director Roy Ward Baker discussing "The Man Outside." That's a healthy batch of bonus features--and a real surprise for American fans who are used to featureless Region 1 releases of these series. Koch also does a good job describing the series:

Tall, handsome and debonair, John Mannering (Steve Forrest), aka THE BARON, is an international art and antiques dealer working with British Intelligence tracking stolen treasures. In a world of danger, greed and intrigue, THE BARON, aided by the glamorous Cordelia Winfield (Sue Lloyd), must risk his life on espionage missions to recover priceless works of art and bring criminals to justice.

Koch's 8-disc set of The Baron comes in an attractive, heavily illustrated gatefold package. I'll have a full review up sometime in the next week or so...

TVShowsOnDVD is reporting a June 16 release for Fox's Burn Notice: Season 2, although this has yet to be confirmed by the studio. It sounds right, though, as that's roughly the same timeframe in which we got Season 1 and would be in time for a mid to late summer start for Season 3 on USA. According to the site, it will be a 4-disc set with all sixteen episodes of the two part season, plus bonus material. Specific information on the features isn't available, but the website speculates that they will roughly mirror the generous features on Season 1, including select commentaries, gag reels and possibly deleted scenes. I selected the first season of Burn Notice on DVD as my favorite spy TV DVD of last year.
Posted by Tanner at 1:32 PM