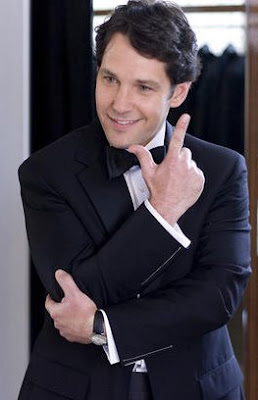 It turns out Duplicity (good as it is) isn’t the only movie of interest to spy fans opening this weekend. The Paul Rudd/Jason Segel comedy I Love You, Man contains a lengthy James Bond reference that pays off later in the film. While it’s just one joke in a very funny movie, it will be a big laugh-getter for Bond fans, so if you plan to see I Love You, Man, you may not want to read any further. For those who weren’t planning on seeing it or don’t mind spoiling the joke, read on for a summary. Rudd’s character, Peter Klaven (who has only had female friends all his life), is searching for a male best friend to be the best man at his impending wedding. Segel’s Sydney Fife seems like just the guy. Sydney accompanies him to shop for tuxes, and when Peter emerges from the dressing room wearing one, he pulls out his camera phone and tells him to strike an "action pose." Peter takes a vague running stance, which Sidney makes fun of. How is that a tuxedo action pose? The only time he’s ever seen someone in a tuxedo in that pose was on the posters for Runaway Bride. Peter still doesn’t know what he means, so Sydney exclaims, "You’re in a tux? What kind of action do you think I mean? Think James Bond." Peter attempts some awkward Bond poses, including a full pantomime of his version of the gun barrel twist. Sydney doesn’t like what he’s seeing, so he directs him to "think Timothy Dalton." That does the trick. "Ah, T-Dalt," says Peter, gripping his imaginary gun with two hands and assuming an approximation of Dalton’s Living Daylights/Licence To Kill teaser poster stance. A lot of attempts at Bondian lines delivered in a bad Sean Connery accent (that Sydney says sounds more like a leprechaun) ensue. The picture posing comes back to haunt (or reward) Peter later in the film when he finds that image of him used without his knowledge on a billboard with the slogan "License to sell."
Posted by Tanner at 2:49 AM

I was asked my opinion of Duplicity after leaving the theater by reps for the website beyondthetrailer.com. The clip can be seen here... http://www.youtube.com/watch?v=QLrCR9cQer0&feature=PlayList&p=F7A70ECB9CC1F3D9&index=5

CAUGHT DUPLICITY LAST NIGHT AND REALLY ENJOYED IT. IT TOOK ME BACK TO THE DAYS OF CHARADE AND ARABESQUE.

Just saw this movie today... It was funny but not great, succeeding mostly on the charm of it's stars who though funny, were not as cool as James Bond is.