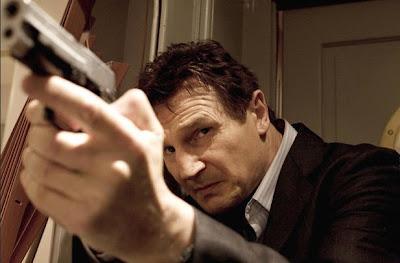 Taken Sequel In The Works

With the entertaining Liam Neeson-starring neo-Eurospy movie Taken (review here) having, ahem, taken in $120 million at the North American box office (so far!), it's no surprise to hear that there's a sequel in the works. JoBlo points the way to an LA Times interview with screenwriter Robert Mark Kamen, who confirms this. He doesn't provide any details on the plot though, so we don't know what country Neeson's daughter will next get kidnapped in! (Hopefully they leave the daughter out entirely and just focus on Neeson's badass former CIA agent.) The whole interview is well worth reading, as it paints an interesting picture of Kamen's working relationship with singlehanded neo-Eurospy titan Luc Besson.
Posted by Tanner at 5:27 PM