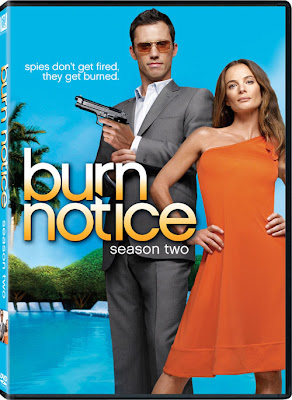 TV Shows On DVD reports that Burn Notice: Season Two will hit DVD courtesy of Fox Home Entertainment on June 16, as previously rumored. The four-disc set will retail for $59.99 (although of course it can be found much cheaper), while a Blu-Ray version will be released the same day for ten dollars more. (Season One is not yet available on Blu-Ray.) Extras still aren't confirmed, but are expected to be in keeping with the fairly impressive features on the first season DVDs. The retailer write-up describes the show as "Miami Vice meets McGuyver," which I guess is kind of accurate, but other than the Miami setting and consequent color palette, there's not really too much Vice in Burn Notice. I think The Equalizer or Magnum, PI would be closer 80s matches. But perhaps the Sixties are a better decade to turn to to describe this show that way. I think the perfect logline can be made up from two ITC classics: it's The Saint meets The Prisoner in Miami. Like Simon Templar, Michael Westen uses his unique skill set to help those in need. He and his immediate family also have an uncanny ability to walk into trouble. But while he's doing all that helping, the former spy is also trying to figure out who "burned" him ("Who is Number One?") and escape from the idyllic location in which he finds himself prisoner. Perhaps Burn Notice doesn't quite achieve the esteemed summits of its illustrious forbears, but it's still a damn good show in its own right. I selected the first season of Burn Notice on DVD as my favorite spy TV DVD of last year.
Posted by Tanner at 1:25 PM

I'm impressed that you wrote this recommendation without ever saying, "Gabrielle Anwar sure is pretty." I think that might be all I'd be capable of typing in your place.