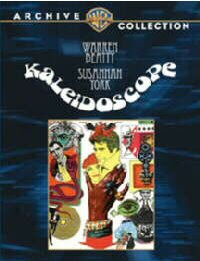 The Hollywood Reporter reports that Warner Bros.' home entertainment division "has come up with an innovative plan to allow custom ordering of 150 films never before released on DVD." They've created The Warner Archive Collection, which burns custom-made DVDs from the studio's library on demand. According to the trade, "upon the selection and purchase of a title -- at $19.95 per disc -- Warners will burn, package and ship the DVD to customers for receipt within an estimated five days." The plan is to release 20-30 new titles a month on the site, with more than 300 titles available by the end of the year. It's a great way to get studio-quality prints of hard-to-find titles legally, similar to Columbia's official "Bootleg Series" of rare Bob Dylan recordings, designed to combat the proliferation of bootlegs of the artist's music with better quality versions. I love this idea!
The only spy title I've discovered so far is the 1966 Warren Beatty film Kaleidoscope... but that's a pretty great one! The film takes the central device of Ian Fleming's novel Casino Royale: British Intelligence sends a man in to bankrupt an enemy by beating him at cards... and Kaleidoscope plays it straighter than the 1967 film of Casino Royale. Kaleidoscope is quite a fun little Swinging Sixties spy movie, co-starring Susannah York and the great spy character actor Clive Revill (Fathom, Modesty Blaise). Memorable Prisoner Number 2 Eric Porter plays the Le Chiffre role. It's certainly essential viewing for Ian Fleming fans for its unauthorized use of his famous plot, which was close enough to warrant coverage in the first published study of the Bond films, John Brosnan's James Bond in the Cinema.
With new titles being added monthly, hopefully some more spy titles will show up. (Other titles of interest to cult movie aficionados include the Anne Francis vehicle Brainstorm, the much sought-after Hammer thriller Crescendo and the 1975 Ron Ely movie of Doc Savage.) "With a cinematic legacy as rich and varied as that found within our library, the challenge has been to meet the voracious demand of consumers who are seeking their favorite films on DVD," Warner Home Video marketing maven George Feltenstein told the Hollywood Reporter. "But the advent of burn-to-order technology has solved the dilemma." I really hope that the model succeeds for Warner Brothers, and that other studios (and even private copyright holders) follow suit and open up their vaults. If that happens, there's a much greater likelihood of niche genre obscurities like Eurospy titles coming onto the market than through standard commercial DVD release.
What's still unclear, however, is what this means for the traditional market. Does the fact that Kaleidoscope is now available on demand mean that there will never be a full-fledged special edition DVD on the market? Probably. But if it sells really well, what then? I would imagine that WB would use online sales as an indicator of interest in titles, and that some might yet emerge in stores. For now, though, all that remains to be seen.
Posted by Tanner at 1:26 PM

Damn, you're good! I was going to e-mail you about this. A friend has ordered another movie from this selection. If he tells me that the quality of the picture is good, I'll order Kaleidoscope.

I recently came across your blog and have been reading along. I thought I would leave my first comment. I dont know what to say except that I have enjoyed reading. Nice blog. I will keep visiting this blog very often.