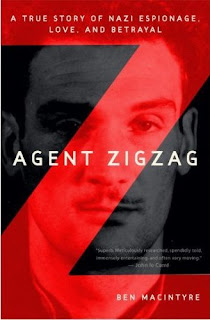 Variety reports that Race To Witch Mountain co-writer Mark Bomback will pen the previously announced adaptation of Ben Macintyre's Agent Zigzag for Tom Hanks's company, Playtone. The book was acquired by New Line for Hanks to produce during a bidding war in 2007. Macintyre also wrote last year's Ian Fleming Centenary book For Your Eyes Only: Ian Fleming + James Bond. Agent Zigzag is the true story of a charming criminal who was trained by the Germans to spy on the British during WWII, but instead offered his services as a double agent to the British.

In an article about Get Smart director Pete Segal helming the Ben Stiller threequel Little Fockers, Variety mentions that the Smart sequel has been delayed: "Segal was expecting to return as the director of Get Smart 2 this year but became available when Steve Carell instead made a deal to team with Tina Fey in the Shawn Levy-directed comedy Date Night for Fox." The trade does make it clear, though, that Smart is still a priority for the director. "If the stars align, Segal will direct Little Fockers and have plenty of time to complete his work and be ready to helm Get Smart 2 for Warner Bros. and Village Roadshow Pictures."
Posted by Tanner at 1:15 PM