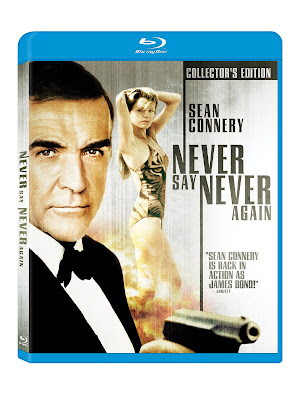 I assume that a lot of readers of this site are probably like me. The months following the theatrical release of a new James Bond movie are always trying, because it eats at me that during those months my James Bond DVD collection is not complete. I no longer own all the movies. Quantum of Solace will never rank among my favorite Bonds (far from it, in fact), but that does nothing to quell my anxiety over not owning it. I'm a completist; I have a need to possess all of the James Bond movies for home viewing. So today, I can breathe a big sigh of relief along with legions of other Bond fans, because today is the day that Quantum of Solace becomes available for us to own, and once again our collections are complete. (Of course, now I can't wait until it's not complete again, because that will mean there's another new Bond movie out!) 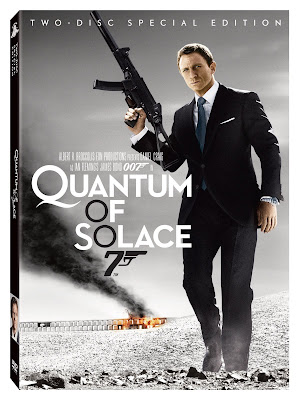 Anyway, Quantum of Solace is available in several configurations. There's a single-disc bare-bones release, a two-disc version that includes a selection of making-of documentaries previously seen on TV in the UK, and a Blu-Ray that contains the same features. It should be noted that even the two-disc affair is not a "Special Edition"; it's just providing a few extra features to tide fans over. I don't see the point in complaining about the features, as MGM has been pretty up front with the fact that there will indeed be a more lavish Special Edition down the road (but can it possibly equal Son's fantastic Casino Royale one?). Mark Forster has even discussed recording the commentary track. So you know it's coming; no one's playing any tricks. But if you're like me, you can't possibly wait, and will need to own some version of Quantum of Solace as a stopgap until then! Target has an exclusive version that comes packaged with a miniature edition of the impressive DK photography book Bond On Set: Filming Quantum of Solace.

For those who were less than thrilled with Quantum of Solace, there are still plenty of other James Bond releases to thrill you today. Next up is the first ever Special Edition of Never Say Never Again, the 1983 renegade production that marked Sean Connery's return to the role. This Kevin McClory-produced remake of Thunderball certainly divides Bond fans, but personally I love it. And love it or hate it, anyone who likes Bond should be pleased to have a Special Edition. It's got one of the most interesting behind-the-scenes story of any Bond production, and hopefully Steven Jay Rubin's documentary on that will be as engrossing as Robert Sellers' fascinating book on the subject, The Battle For Bond. There's also a commentary from Rubin and director Irvin Kershner (The Empire Strikes Back) which I'm very much looking forward to hearing! This release is a joyous occasion, because just a few years ago an MGM Home Video rep said that we'd never see a Special Edition of this title, and that we were lucky to have any version on DVD! I'm glad that times have changed. For videophiles, this release is also available on Blu-Ray! (Can you believe we're getting Never Say Never Again on Blu-Ray before You Only Live Twice and Diamonds Are Forever???)

Speaking of Blu-Ray, today also sees the next wave of classic Bond catalog titles on the format. Moonraker, The World Is Not Enough and Goldfinger are available individually or together as James Bond Blu-Ray: Volume 3. Additionally, Best Buy has an exclusive fourth volume (in different packaging from the other three volumes, sure to irk obsessive-compulsives) containing Quantum of Solace, Licence To Kill and The Man With the Golden Gun. Not only is this a great deal at $59.99, but it's also the only way to get those last two titles for the time being. They don’t get released on their own until May 12.

And speaking of deals, Amazon has an unbeatable offer for today only: get the James Bond Ultimate Collector's Set of all the legitimate films from Dr. No through Casino Royale on DVD for just $89.95 (that's a whopping $200 off the list price for twenty-one double-disc DVDs) or the two previous volumes of Blu-Ray Bonds for just $64.95 (six movies in total, down from $180, if you can believe it). These offers end tonight.
Posted by Tanner at 12:47 PM