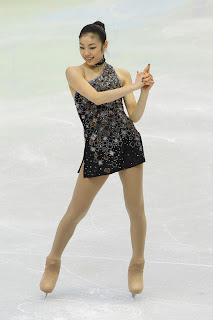 Spies are everywhere—even at the Olympics!  South Korean figure skater Kim Yu-Na (Kim Yuna) took the lead in the women's short program with a "Bond Girl"-inspired routine to the sounds of John Barry's distinctive 007 music (with assists from Monty Norman and David Arnold).  Most mainstream news reports erroneously say she skated to "The James Bond Theme," but Bond fans know differently.  It was definitely a medley of Bond music, beginning with what sounded to me like some of the underwater cues from Thunderball before going into bits of From Russia With Love and (maybe?) You Only Live Twice and concluding with some David Arnold music and an Arnold-era verison of the Bond theme.  (If anyone identified the exact tracks, please comment below!)  Sadly, she didn't work in any of Bill Conti's score from For Your Eyes Only, in which ice skating features in the plot.  Oh well; Conti's music wouldn't have fit in very smoothly with the more classic stuff.  The 19-year-old sensation incorporated the Bond mystique into her routine as well, pulling off a convincing "Bond Girl" look with her choice of costume and ending up in a gun pose after "firing" at the audience—or the competition. See this real-life Bibi Dahl for yourself on YouTube.

Yu-Na is not the first skater to perform a routine to Bond music; I remember Brian Boitano doing a similar program (I think in Lillehammer) and even ending it with a traditional gun barrell pose.  French skater Eric Millot and Russian Tatiana Rachkova have also used Bond music.  Personally, I'm not that into figure skating, but I am into that music, and I'll always root for anyone who chooses it!
Posted by Tanner at 1:10 PM

According to the International Skating Union website, Kim's "Bond" routine contained excerpts from the following scores:

Some of these entries are ID'd a bit funky but we get the idea.

Thanks, John! What a great resource! I had no idea the music sources were officially compiled.

I wonder who chose the actual pieces? Yuna? Her choreographer? Her coach? Whatever the case, it was a good selection. As all those Eurospy directors who gave their knock-off movies titles like Target Goldseven and Due Mafiosi contra Goldginger knew so well, audiences the world over connect James Bond with Gold! And it worked for Kim Yuna...