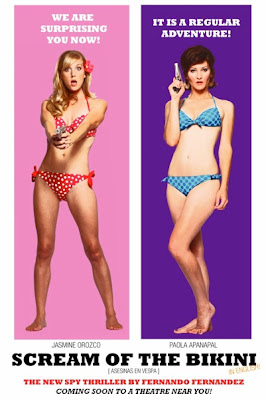 Eurospy Homage Scream Of The Bikini Screening In Los Angeles

The low budget indy film Scream of the Bikini, first reported on here) will have midnight showings in Los Angeles next weekend, according to the film's official website.  (A big thank you to the several people who emailed me about this!)  Scream of the Bikini is a Sixties Eurospy spoof made today in the "of its time" style and spirit of such recent retro comedies as OSS 117: Cairo Nest of Spies, OSS 117: Lost in Rio and Black Dynamite. The conceit is that it's a lost spy thriller "filmed somewhere in South America in 1966, and poorly translated and dubbed by Germans."  It sounds like a lot of fun, and I really, really hope I manage to make one of these screenings, although unfortunately that's a really busy weekend for me, so it's up in the air right now.  But for those of you who can make it, definitely go by and support the film!  I hope this leads to a wider "midnight movie" release around the country.  Scream of the Bikini will play at midnight (technically 11:55 PM) at Laemlle's Sunset 5 on Friday, February 19 and Saturday, February 20.  Tickets can be booked in advance through the theater's website.  For more details on the film, also check out its official site.
Posted by Tanner at 6:35 PM

I'd love to see this! I wonder if they have a SF screening?