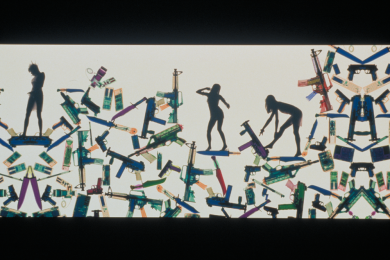 This is a very cool surprise. The Los Angeles County Museum of Art is celebrating the 50th anniversary of James Bond in the cinema with an installation exhibit called "...is James Bond" running from June 9 through September 9, 2012. The exhibit will present the opening credits sequences from all the 007 movies arranged thematically on six monitors while the full set of sequences is looped and projected with audio in large format on one of the gallery walls. That sounds awesome! I'm thrilled to see Bond credit sequences (pioneered by the great Maurice Binder) recognized and legitimized as the works of art they are at an actual art museum, and I love the idea of standing in a room with them playing all around me, so I can't wait to experience it this summer. Here's the official write-up:


Over the course of twenty-two films covering the life of 007, James Bond, one element has remained constant: the opening credit sequence. Beginning with Dr. No, the opening credits, created by Maurice Binder, have functioned as separate and unique works of art—a ground-breaking exercise of cinema as daring as the title character, calculated to immerse us in the sensibility of 007.

This exhibition was co-organized by the Los Angeles County Museum of Art and Loyola Marymount University's School of Film and Television. The organizers are grateful for the special collaboration of Danjaq LLC and Metro-Goldwyn-Mayer Studios.

I hope LACMA screens some of the Bond films in their fantastic theater to accompany the exhibit!

A big thanks to Phil for the alert!
Posted by Tanner at 10:52 AM

Sweet! Didn't know about this. Thanks for the alert. :)

I'd like to come down and see this, especially if we can catch a screening or two as well. keep me posted :)
-Jason (Spy Vibe)