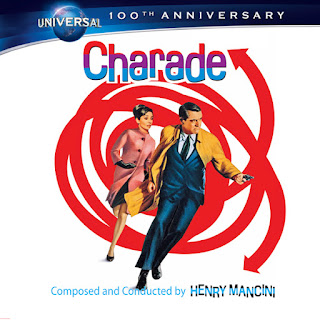 It can be frustrating being a fan of Henry Mancini's scores. Few of them have ever been released in their original versions. Most of the Sixties ones, including Stanley Donen's fantastic Cary Grant/Audrey Hepburn spy movie Charade, were cut down and re-recorded as easy listening albums, which often meant leaving out some of the better action queues. This week, however, fans of that particular film have a lot to be happy about. Intrada has released the complete 77-minute score, in its original recording, for the first time ever on a new CD celebrating Universal's 100th anniversary and tying in with the studio's recent Charade DVD reissue. The 28-track disc can be purchased from online soundtrack specialists like Buysoundtrax or Screen Archives, or directly from Intrada. Now if only Intrada would follow this up with complete scores for Arabesqe of Return of the Pink Panther...

Thanks to Collin for the alert.
Posted by Tanner at 6:50 PM

Hey guys....new here, but I just saw on Twitter this awesome script of an intro from Henry Mancini on Elton John from @HenryMancini. Anyone know where to get a clip of this show on YouTube or somewhere?