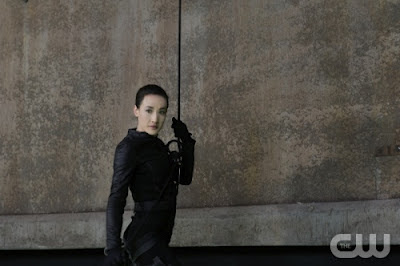 Good news for Nikita fans! Deadline reports that despite low ratings, the CW has renewed the Maggie Q assassin drama for a third season. I'm very happily surprised. The pick-up comes despite the fact that Nikita has averaged lower ratings than Ringer and Secret Circle, two shows the network did cancel. Additionally (and far less surprisingly), CBS has renewed the hit J.J. Abrams/Jonah Nolan Equalizer-meets-Batman drama Person of Interest, starring Jim Caviezel as a former CIA operative now using his specialized skill set in the private sector (for eccentric billionaire Michael Emerson) to prevent violent crimes and atone for some of the damage he may have caused during his spy career.

Unfortunately, with the good news comes bad news for fans of current spy television: TV Line reports that ABC has cancelled Missing, arguably the best network spy show since Alias. That's really too bad, because Missing has only gotten better since its pilot (reviewed here), and I've been thoroughly enjoying the top-notch action and fabulous European locations week after week. On top of that, Ashley Judd made a much better spy than I ever would have guessed, and the supporting cast is also first rate. Hopefully the first (and only) season will wrap up with a satisfying resolution of some sort. At least the DVDs have already been announced, so spy fans will be able to enjoy this single season for years to come. It's definitely one I'll re-watch from time to time. ABC has also officially cancelled its Sixties-set spying stewardess drama Pan Am. There had been some hope that show might live on despite low ratings in America (which led to it being pulled from the schedule a while ago) because it's very, very popular overseas. (In fact, it just received the coveted Rose d'Or award in Switzerland!) That always seemed like a long shot though.
Posted by Tanner at 3:55 PM