Saintly Ian Ogilvy to Appear at L.A. Convention This Weekend 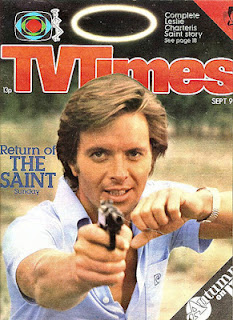 Return of the Saint star Ian Ogilvy will make a very rare U.S. convention appearance this Sunday, May 6, at the Los Angeles Comic Book and Science Fiction Convention at the Shrine Auditorium Expo Center. Ogilvy, who also starred in Witchfinder General, And Now the Screaming Starts and From Beyond the Grave and made memorable guest appearances on The Avengers and The Adventures of Brisco County Jr. (among many other shows), will be a featured guest at the show and sign from 12-2pm. (There will be a charge for autographs, for which he will either sign your memorabilia or provide a photo.) I was fortunate enough to meet Ogilvy a few years ago at a West Hollywood Book Fair where he was promoting his latest children's book, Measle and the Wrathmonk (he's written a whole series of Measle titles), and found him to be very friendly and humble. He graciously signed my Return of the Saint and Amicus DVDs and told some funny and self-deprecating stories about being mistaken for Roger Moore. For any Saint fans in the L.A. area, this chance to meet the Seventies Simon Templar in the flesh is an unmissable opportunity! Admission to the Con itself, which runs from 10am-5pm, is $8.
Posted by Tanner at 1:12 AM

I always thought it was a shame Ogilvy didn't have a bigger career. I thought he was great as the Saint, and 'Witchfinder General' is one of my favorite horror films.

I agree. (And I bet he does too.) I've liked him in everything I've seen him in. I think the first thing I ever saw him in was his Avengers episode, in which he made quite an impression. I thought, "that guy should have had his own series!" only to discover that he DID. When I realized he was the guy who took over from Roger Moore, seeing Return of the Saint became a priority. On any particular day, Ogilvy or Moore might be my favorite Simon Templar. I love both of their portrayals.