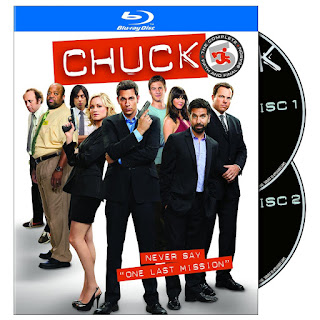 The only major new North American release this week on the spy front is Chuck: The Complete Fifth and Final Season, available on both DVD and Blu-ray from Warner Home Video. After a recharged (and Dalton-powered) fourth season, the fifth season wasn't one of the show's best, but it still had its moments. And Warner Home Video makes the package even more appealing by including a wealth of special features, among them an extended version of the series finale, audio commentaries on the last two episodes, deleted scenes (or "declassified scenes" as they always call them on Chuck), a gag reel, full versions of the Buy More TV commercials with Big Mike and Captain Awesome and the featurettes "Chuck: The Final Episode - An Intimate Look at the Climactic Shooting of the Final Episode," "Sandwiches and Superfans: The Saving of a Show," "Spy Tunes: Scoring the World of Chuck," "Chuck: The Beginnings," "Chuck: Through the Years," and "Chuck: The Future." Retail is $39.98 for the DVD and $49.99 for the Blu-ray, though both are, of course, available for less on Amazon.
Posted by Tanner at 2:34 PM

Alex Rider: A Taste of Death short story was out in March.

Mission: Impossible: the first two seasons of the 1980s revival is out.

Thanks, anon, I didn't know about the new Alex Rider story! (Not going to read it yet, though, because I still haven't read the final book!)

I've covered the release of both 80s M:I seasons, but will eventually get around to posting in-depth reviews of the whole sets to match my other M:I reviews. In fact, the first one will be coming pretty soon!

if you do get it and get that APPS to work, please post the story or email it or something because it's totally unavailable to most and those who can get it, have trouble getting the APPS to work.