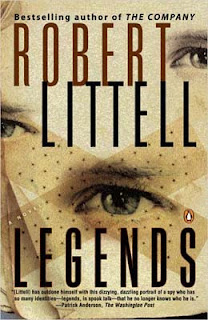 Deadline reports that TNT’s current development slate contains two spy shows that we’ve heard about before... but not for a while. Legends, based on the Robert Littell novel, was first announced in 2010 when it was on NBC's development slate, but the network passed and it looked dead. Producer Howard Gordon (whose spy experience includes 24 and Homeland, the latter of which was my favorite new spy show of last year) said as much in an interview last year. But, apparently, it's not dead after all! It's in development again at TNT, and here's how the cable network describes it: "The story follows a deep-cover operative named Martin Odum, who has an uncanny ability to transform himself into a different person for each job. But his own identity comes into question when a mysterious stranger suggests that Martin isn’t who he thinks he is." The novel got good reviews, and I'm on board for anything Gordon puts his name on after being blown away by Homeland. He's joined on Legends by Mark Bomback (Agent Zigzag) and by his Homeland collaborator Jeffrey Nachmanoff (Traitor, American Assassin).

Also still in active development at TNT is the Tom Clancy drama we first heard about last fall, Tom Clancy's Homeland Security, but Clancy is no longer listed as a writer as he was when the story first broke... just an executive producer and part of the title. According to the network, "this event-based procedural written by Javier Grillo-Marxuach and set in Tom Clancy’s world of espionage pits a select team of domestic intelligence operatives against enemies within and without, from narco-traffickers and nuclear terrorists to cyber-criminals and human smugglers." Not spy-related, but still probably of interest to readers here, is another series on the slate based on Ross McDonald's Lew Archer novels from The Closer creator James Duff and Close to Home creator Jim Leonard. Tying it in to spies, Peter Graves played Archer in a 1974 pilot, The Underground Man, which failed to go to series. Bear in mind, of course, that not all of these TNT shows in development will even make it to pilot, let alone series. Still, I'm rooting for them! Especially Legends.
Posted by Tanner at 6:40 PM