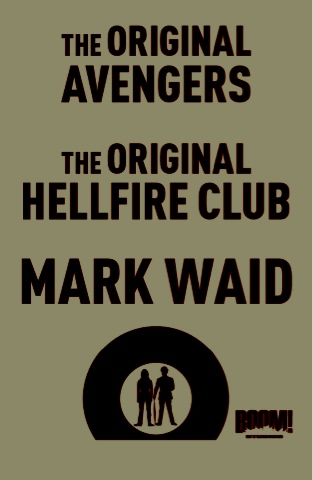 Those other Avengers (and they're good ones, too... just not the real ones!) might be getting all the media attention right now, but Boom! Studios is taking advantage of that attention to reintroduce comics readers to the original Avengers, John Steed and Emma Peel, heroes of the fantastic, classic Sixties spy series during its most popular incarnation. When Boom! began reprinting Grant Morrison's Steed and Mrs. Peel comic from the early 90s, I hoped aloud that those reprints might lead into a series of new Avengers comic books. (Well, not New Avengers comics... not yet, anyway; for now all I'm hoping for is new comics about the old Avengers! Then maybe Purdy and Gambit down the road.) Well, it looks like that's happening! And with some major talent on board. Boom! released this teaser image this morning, and a product listing at Midtown Comics (via Bleeding Cool) fills in the details.

As in the 90s, the title is again Steed and Mrs. Peel so as to avoid confusion with Marvel's product. (Even though the TV Avengers came first.) That information alone tells us something: Steed's partner will apparently be Emma Peel rather than Cathy Gale, Tara King, Venus Smith or someone else. (Of course it doesn't rule out the possibility of other partners appearing as well, as they did in the Morrison run.) And (here's the big news!) the listing confirms that this Steed and Mrs. Peel is an ongoing series, not just a mini! As the teaser graphic reveals, the writer is comics superstar Mark Waid, who previously gave Steed and Emma a one-panel guest appearance in his Kingdom Come epic for DC. (Or perhaps artist Alex Ross was responsible for that unauthorized cameo.) The Avengers TV show inspired more than one title in the Marvel universe. As I've blogged about before, the X-Men's nemesis the Hellfire Club and its White Queen, Emma Frost (as well as founder Jason Wyngarde) all come from a particularly memorable Avengers episode called "The Queen of Sin." (See visual comparisons here.) Teased in the graphic and confirmed in the listing, the original version of the Hellfire Club will feature prominently in Waid's first issue, a #0 special. It's unclear from the copy if this is a direct adaptation of the TV episode or a sequel, but I would bet the latter. What the copy does make clear is that the new series takes place "in the continuity of the original TV series," so presumably that means a Sixties setting. Steve Bryant (Athena Voltaire) will handle art chorse, while Joseph Michael Linser provides a variant cover. Additionally, Boom! will collect the 90s Grant Morrison series in a trade paperback

Wow! An ongoing Avengers comic! I can't wait. What a great day today is for spy fans.

Follow this link to read my opinions of some previous Avengers comics.
Posted by Tanner at 5:41 PM