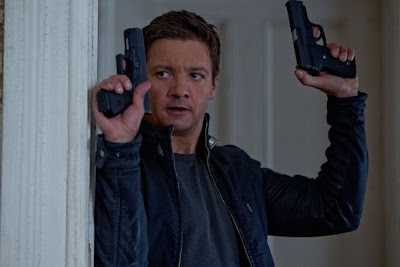 The Bourne series, initially based on Robert Ludlum's terrific trilogy of novels about amnesiac assassin Jason Bourne, is one of Universal's most successful franchises going, so it's no surprise whatsoever to learn that another installment is in the works. We all expected it. Universal chairman Adam Fogelson said as much earlier this year. Now it's official. Deadline reports today that Anthony Peckham has been hired to pen a script chronicling the continuing adventures not of Matt Damon's Jason Bourne, but of Jeremy Renner's Aaron Cross, the Outcome agent who filled in for Bourne as hero of the most recent movie in the series, The Bourne Legacy. This, also, is not unexpected. While Damon still reiterates from time to time that he'd be willing to return to the series should director Paul Greengrass (who helmed the second and third Damon entries) return as well, he's also voiced his displeasure that Universal continued the series without him. (This despite the fact that The Bourne Legacy actually went out of its way not to step on the toes of a potential Damon return, and to make it clear that Bourne himself was still out there!) While I was disappointed in The Bourne Legacy (read my review here), I did like Renner in the lead role, and would be happy to see him continue the series. I just hope Peckham (who's previously had a go at another iconic fictional spy, as one of the many writers to contribute over the years to the next Jack Ryan movie) comes up with something better for him to do than keep chasing his pills! I still wish that they'd simply recast the Bourne role, like James Bond, rather than stepping into spinoff territory, but obviously that ship has sailed now. In either case, I firmly believe that the best direction for future Bourne movies lies with a more faithful adaptation of Ludlum's excellent novel The Bourne Supremacy (review here). The movie of that title took only the title, and created an entirely new plot to go with it. (Writer Tony Gilroy was reportedly not a fan of the Ludlum source material.) Ludlum's dense Hong Kong-set novel contains enough plot to propel another two Bourne movies (at least!), and the material could be adapted to suit either Damon's film version of Bourne (along with Julia Stiles' Nicky, since the movies killed off the Marie character who's so important to the plot of that book) or Renner's Aaron Cross (along with Rachel Weiscz' Marta). In all likelihood, though, I'll probably have to wait for the inevitable Bourne reboot years down the line to see a more faithful film version of that story!

There's no word so far about a possible title for this next film, but since the franchise is internationally recognized by the name Bourne, not Cross, I assume it will still have Bourne in the title even if the character himself is nowhere to be found. Which is kind of weird, but whatever. I'll happily pay to see another Bourne film no matter what it's called! But I'd be even more interested in seeing some of Ludlum's other novels adapted for the screen. Some of the great ones, like The Parsifal Mosaic, The Chancellor Manuscript, The Matarese Circle and The Sigma Protocol (review here) have long been in development, but frustratingly have yet to materialize.
Posted by Tanner at 2:58 PM

The Bourne Legacy was so unspeakably bad I'm not holding out much hope for this one.

The three originals with Damon were more than enough IMO.

Is Hollywood really that bankrupt of original ideas? I'm getting sick of the 'sausage factory' mentality.

Enough with the Mission: Impossible sequels too, while I think about it.

I am so glad to get my hand on this bourne legacy jacket. it’s quite stylish and trendy and give a me very bold and tough look. the stitching done on this jacket is very strong and durable. Thanks guys for this Jeremy Renner Jacket. it will be fun wearing it to the cinemas for the new bourne legacy movie.

You know, I don't mind spam when it's on topic! That jacket is actually pretty cool, and it did look good in the film. I need to write about The Living Daylights and hope that causes someone to post a link to where I can buy Timothy Dalton's long leather jacket from that, which I've been searching for for years! It would also be cool if a post like this popped up on one of my Mission: Impossible reviews with a link to that leather jacket Jim is so fond of in the later seasons, with all the buckles...

Simes, I will never grow tired of spy sequels! They won't all be good, but as long as they keep making them, there's at least a chance they will every time. Who would have expected the FOURTH Mission: Impossible movie to finally be the one that got it right?

Isn't it funny how the whole plot of The Bourne Ultimatum gets more and more real these days?