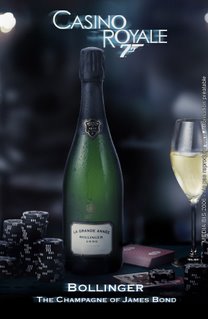 I just wanted to wish everyone a happy new year. Hope it's better than mine, stuck, sick, on the wrong coast. Have fun, but stay safe and don’t forget to call a cab if you’ve had too much Bollinger or one too many vodka martinis as you welcome the year of Double O Seven, even if you did so at the Bond-themed ‘007 New Year’s Eve Party at the W Hotel in Los Angeles. After all, you don’t want to start the year off by wrapping the old Aston around a telephone poll!

2006 turned out to be a truly great year for spies on film, with a trio of great spy movies to close the year (Casino Royale, The Good Shepherd and The Good German). There were also a lot of essential (and, in some cases, long-awaited) spy DVD releases, like the newly-remastered James Bond sets, the first seasons of The Wild Wild West and Mission: Impossible, the final volume of A&E’s complete release of every surviving Avengers episode (containing the earliest Cathy Gale episodes, as well as some Venus Smith and Dr. Martin King... and Steed’s whippet, Sheeba!), the final season of Alias, the complete surviving series of Adam Adamant Lives! (at last!), Honey West, Operation Crossbow, The Quiller Memorandum, The Ultimate Flint Collection, Ring Around the World and Special Mission Lady Chaplin!

‘007 looks to be just as exciting on the DVD front with new seasons of Wild Wild West and Mission: Impossible, the consumer release of all seasons of Get Smart, an extended edition of The Good Shepherd, The Kommissar X Collection, the Espionage In Tangiers/Assassination In Rome double feature, and, of course, Casino Royale (2006). Fingers crossed for Warner Bros. and Anchor Bay untangling the Man From UNCLE rights situation in ‘007, too! In theaters, we’ve got a new Bourne movie on the way, as well as the Get Smart movie with Steve Carrell. Why the Broccolis didn’t arrange for there to be a Bond movie coming out in this of all years is a mystery to me. The marketing guys could have gone home; all their work would be done for them! What’s better advertising than an entire year named after your product??? Oh, well. Happy 2007, everyone!
Posted by Tanner at 10:41 AM