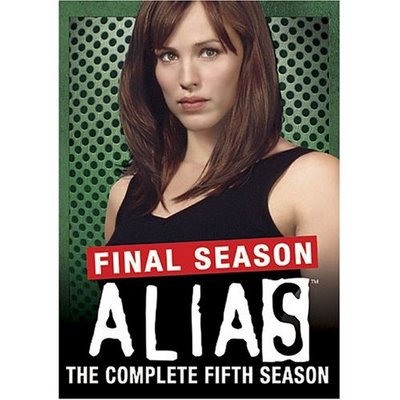 It’s unfortunate that my first Alias review on this blog is of its stumbling final season rather than its infinitely grander beginning, but the latest DVD release is indeed Alias: The Complete Fifth Season. And it’s not as bad on DVD as it was on TV. In fact, it’s a serviceable collection of entertaining episodes. Definitely not the thing to buy if you’ve never seen Alias before, but still an integral part of any fan’s collection.

One of the major problems with the fifth season was that Jennifer Garner’s pregnancy meant that she would be out of action for a while, so new characters had to be written in to solve the ensuing fight deficit. Unfortunately, none of the three new regulars had enough time to be developed into interesting characters. (Well, actually Angel veteran Amy Acker managed to make an impression as Kelly Peyton, but she was a villain, not a good guy.) Luckily, on DVD you can easily fast forward through all of Balthazar Getty’s plotline as Tom Grace, kno

wing in retrospect that it ultimately goes nowhere. (And if you didn’t know that, I’m telling you now: there’s no payoff, so don’t bother.) Rachel Nichols’ character annoyed me while watching the show on TV, but on second viewing on DVD her character definitely improves. She actually does have an arc during the season, even if it’s essentially the same one Sidney went through in Season 1.

The other major problem with the final season actually started to hinder the show as early as Season 3. Milo Rambaldi, a DaVinci-esque Italian alchemist, wrote Nostrodamus-like predictions and created fantastic bio-weapons centuries ahead of their time, then hid the pieces around the wor

ld. These inventions made great Macguffins to be sought by nearly all of Alias’s characters, but sadly Season 5 is what happens when Macguffins run amok. What started out as a great premise that drove the first few seasons turned into a burden when it became clear that the writers hadn’t planned out what to do with it. Rambaldi’s much talked about "Endgame" changed so many times that it no longer made a lick of sense and, frankly, it’s hard to care about it too much. My solution? Don’t.

Watching the show on TV I was eager for the arc to play out and disappointed that it didn’t. Re-watching on DVD, I was able to just watch the episodes on their own and found nearly all of them thoroughly enjoyable. When it comes down to it, Alias is a fun show, not a serious one. Even though some of Rambaldi’s inventions recalled the sci-fi trappings of The Prisoner, a much better Sixties comparison for Alias is The Saint. Certainly not high art, but each episode is just a lot of fun. And there are many days when I’d rather watch a Saint than a Prisoner. Same goes for Alias. Season 5 works just as well as any of the others if you just decide you’re in the mood for an Alias and watch a single episode rather than trying to follow the whole arc.

"Bob" stands out as a particularly great stand-alone episode, and makes the best use of Rachel Nichols’ newbie spy when she sleeps with recurring villain Sark (David Anders) only to learn later that he’s a bad guy. There are a lot of humorous moments, the best of which has to be super-serious Victor Garber’s deadpan delivery of the line "thong."

The Alias humor is on display throughout the season. The Joe Friday-esque agents/babysitters in "There’s Only One Sydney Bristow" are hilarious, and seem to have walked right out of a Joss Whedon show. ("Oh, no, ma’am. The mother/child bond is impossible to replicate, even by Agent Dalton and myself.") That episode (the series’ hundredth) also serves up some great Alias action and the return of old favorites Will Tippin (Bradley Cooper) and Anna Espinosa (Gina Torres). It also uses the same device (literally) as series creator J.J. Abrams’ M:i:III when a tiny bomb is inserted in someone’s head. (Unfortunately that episode aired just a week before the movie came out.)

The finale, "All the Time In the World" (nice Bond reference!), doesn’t wrap up the Rambaldi plot with any satisfaction, but it’s still a good episode. The fate of series villain Arvin Sloane (Ron Rifkin) is priceless, and provides Garber’s Jack Bristow with a final badass moment to rival any of Jack Bauer’s. ("You may have beaten death, Arvin, but you can’t beat me!")

Alias: The Complete Fifth Season comes packaged in a bottom-loading plastic slipcase that’s too loose so that the cardboard gatefold that holds the discs falls out when you pull it off the shelf. It’s a bad design. The four single-sided DVDs are double stacked in the gatefold.

Disc 4 houses all the extras except the commentaries. First up are several forced trailers for other Disney products that have nothing to do with Alias like Apocalypto, Pirates and that Mark Wahlberg football movie. You can also access some more appropriate trailers from the main menu for things like the Alias "Rambaldi Cube" that houses the complete series and J.J. Abrams’ other (even better) show, Lost: Season 2.

The first legitimate extra is called "The Legend of Rambaldi." I was expecting nothing more than a clip montage and pleasantly surprised at what I got instead. It begins like a History Channel special on a real alchemist. This bit is very well-done, with a pitch-perfect narrator (probably a veteran of many such specials), nice motion control shots of Rambaldi artifacts from the show, and good B-roll of the Italian city where the inventor was supposedly born and old paintings of historical figures who apparently interacted with Rambaldi. I don’t remember if we once saw bits of this on the series, but if it was originally produced for this DVD, then it shows that a lot of time and effort was put into these extras.

The featurette nicely segues (via Marshall) into Abrams talking about Rambaldi and admitting that he’s nothing more than a Macguffin. Then we get a peak inside the "Rambaldi vault" where the show’s prop guy talks about all the various devices they had to make. Pretty neat. Spliced in is Rachel Nichols (who’s all over these DVD features) talking about "her favorite Rambaldi artifact" which doesn’t make much sense. Michael Vartan puts it well when he says "Fuck Rambaldi." (It’s bleeped.) Less convincing is the story editor, who tries to tell us that Rambaldi has become a spiritual underpinning for the series, although Ron (Sloane) Rifkin makes sense when he says it’s "purely religious." Abrams pretty much negates all that hokum by saying Rambaldi himself is far less important than what he did to motivate our characters and move our story. True, and I'm glad to see them admit it. Still, they could have had the courtesy to their audience to wrap it all up in a way that made sense!

The next featurette is on the 100th episode and contains a lot of behind-the-scenes footage on set. It’s got interviews with the prodigal Bradley Cooper (who says Will’s back "to get tortured some more") and the ubiquitous Rachel Nichols. Finally, there’s some party footage hosted by her, in which we see just about everyone who’s ever been on the show milling about. Even J.J. Abrams, who by all accounts abandoned his series outright during it’s final season, drops in, although he doesn’t seem to know a lot of the crew. The highlight is Victor Garber and Ron Rifkin clowning around, in stark contrast to their dour characters.

"The Music of Alias" puts the spotlight on the amazing scoring of Michael Giacchino, but unfortunately isn’t nearly as in-depth as the similar feature on Sean Callery on the latest 24 DVD set. It’s mostly lots of people saying nice things about Giacchino and each pronouncing his name slightly differently. More interesting is some footage of a scoring session intercut with clips of the finished scene they’re working on. Giacchino himself is interviewed, and reveals that "Alias at the beginning relied a lot on these techno rhythms that were layered on top of an orchestral track, but as the show progressed it became more about these people, it needed to be more emotional... And so I found myself, over time, using that techno less and less. Now it’s a completely orchestral show." Fascinating. I didn’t really notice the change! Whatever the style, his music has been the most consistently fantastic element of the show from start to finish. 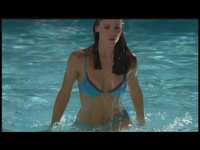 There’s a blooper reel cut in with a silly, newly shot "recreation" of the first phone call from J.J. to Jennifer full of irony. The reel puts the funniest bit up front, with Michael Vartan being chased out of an ice cave by a pink Yeti, then descends into humor of the Balthazarr Getty talking on a banana phone variety. Har, har! Also in here, for some reason, is a short clip reel of Sidney in skimpy clothes, which certainly makes pleasant viewing.

Things wrap up with "The New Recruit: On Set With Rachel Nichols," which turns out to be a lot more interesting than I was anticipating. It’s mostly behind the scenes of "Bob" (in which the Renaissance Hotel at Hollywood & Highland sat in for Brazil), and contains funny bits of Nichols and Anders cutting up during their sex scene.

Nichols and Anders also contribute the best of the season’s four commentaries on that episode, along with writers Monica Breen and Alison Schapker. The track is jokey, but also informative, and covers all aspects of the episode from writing to production. Everything a good commentary should be. It’s much better than the more testosterone-laden track on series premiere "Prophet 5" by Victor Garber (who is funny) and producers Jeff Pinkner and Ken Olin (who really seems like a dick, even though he didn’t on previous seasons’ commentaries). The other commentaries are on "Horizon" and "There’s Only One Sidney Bristow," with the latter being by former production assistants who present a slightly different view of the show. They’re pretty frank. When one marvels how amazing it is that the staff keeps coming up with new, original ideas, another cuts in and says, "What do you mean?" She goes on to point out how Prophet 5 is exactly like The Covenant and K Directorate and all the other Evil Organizations led by Councils of varying numbers that have popped up on the show in the past.

If you’re a fan of the show and on the fence about buying this season because it was sub-par, I’d say go for it. It’s not a satisfying conclusion to a series viewers have invested a lot in, but it is a collection of above average TV episodes that are each enjoyable in their own right. And the extras are pretty good. Again, this isn’t the place to start if you’re new to the show, but it’s definitely worth having for dedicated followers of Sydney Bristow. (And it’s pretty cheap compared to the other seasons!)
Posted by Tanner at 2:23 AM