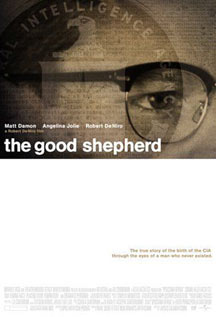 Review: The Good Shepherd
The Good Shepherd is certainly not a perfect movie, but it's a real treat for spy afficionados. If you know anything about CIA history, you'll be rewarded with lots of nods to actual people and events, and if you don't, you'll probably be inspired to learn more. The film chronicles the history of the CIA from the formation of the OSS at the outbreak of WWII to the Bay of Pigs disaster.

Despite its length (nearly 3 hours), I remained fascinated the whole time. Director Robert De Niro's pacing was mostly spot-on, and the flashback structure he and writer Eric Roth employ works well to continue driving the narrative forward even though the story takes place over a long period of time.

The framing story, about the aftermath of the botched Bay of Pigs invasion, takes place in 1961, and is a fairly conventional spy thriller. (Of the Le Carre variety, not the Fleming sort.) The flashback story--and the heart of the movie--is not a thriller, but a sprawling, historical family drama. Even in these segments, though, De Niro skillfully uses many of the trappings and visual tropes of the spy thriller to keep the plot moving along quickly and maintain a tone in keeping with his subject matter. Master cinematographer Bob Richardson (Kill Bill) aids the cause by making sure the movie looks like a spy movie, lighting the men in hats lurking in dark alleyways with impressivly moody effect. The brooding score by Marcelo Zarvos and Bruce Fowler also helps.

What we end up with is a successfull combination of the two plotlines: a family drama that looks and feels like a spy thriller. In this respect (and in the main character's journey), the movie echoes The Godfather, which was a family drama disguised as a crime movie. (Not that The Good Shepherd is in the same league as The Godfather... although it is produced by Francis Ford Coppola.) By the time the flashback storyline has caught up with the framing story, both are very successfully melded as one leading to an exciting and emotional climax.

Matt Damon is quite good as a spy of a very different sort from Jason Bourne, but at times he seems almost too introspective under De Niro's direction. His character, Henry Wilson, displays very little outward emotion, due to the nature of his business.

Damon is a good actor and has the ability to convey a lot in a brief expression, but since he never breaks down (outwardly, at least), it’s difficult to feel like we ever truly get to know the character. Which is the idea, of course, but it’s a bit frustrating. Going the Brokeback Mountain way rather than risking the appalling old age make-up of A Beautiful Mind, no real attempt is made to age Damon, so make sure you pay attention to the helpful captions letting you know what year a given scene is set in. Angelina Jolie, on the other hand, they do manage to age, and very convincingly.

Jolie does a great job cast against type as a long-suffering and unloved CIA wife. Michael Gambon and John Turturro are both excellent, as always, in supporting roles. Alec Baldwin, who's become one of the most reliable supporting actors working, does what he can to spruce up a very small role, but for once he doesn’t end up stealing the show since there’s just not enough there for him to work with. William Hurt, like Damon, plays his spook character as a cypher, delivering every line as if he’s speaking in code. Again, I would have liked to get behind that facade just once. Billy Crudup is horribly miscast as the British agent Arch Cummings (a Kim Philby analogue, originally called "Kip Wiley" by Roth). I can’t tell if his accent itself was actually bad (although I suspect it was), but every time he opened his mouth it was distracting to hear him speaking that way. Why not just cast a British actor?

Speaking of Philby, all of the historical figures referenced in The Good Shepherd are fictionalized. Damon’s Edward Wilson is based on several figures, but most recognizably James Jesus Angleton. (The character’s different enough, though, that I’d still love to see a straightforward Angleton biopic one day!) The legendary founder of the OSS, William "Wild Bill" Donovan has become William Sullivan, played by De Niro. You’ll recognize a slew of other real life personalities peering through their fictionalized analogues, as well. On the one hand, it’s fun to slowly realize who’s supposed to be who, but on the other, I found myself occasionally frustrated when the fictional version didn’t turn out to be as interesting as the real thing, as in Donovan’s case. (Of course, fictionalizing these characters enables Roth to use them to serve his story, and not get bogged down in being factually true to the historical personages.)

The first cut of The Good Shepherd reportedly clocked in at over four hours (and the script was even longer), so it’s understandable that the movie occasionally feels like it’s been cut down from a mini-series. What’s surprising is how little it feels like that. Key moments have obviously been cut out of Crudup’s storyline and out of Wilson's son's storyline, leading to some confusion. But overall, the movie is still coherent. (A longer cut is planned for DVD.) Apparently a subplot involving the brother of Jolie’s character was cut out, probably wisely because it doesn’t seem missed. It’s surprising that a scene with Joe Pesci was left in the movie instead of some of the aforementioned bits that would have clarified story points. It may be because De Niro didn’t want to cut his old Goodfellas buddy out of the picture, but it’s also probably because it’s one of the only times Wilson clearly states his motivations. For a movie that usually veers toward being overly subtle, having a character outright state his convictions like that is remarkably unsubtle, and also unnecessary. The scene could have easily been discarded.

The Good Shepherd has enough problems to likely prevent it from winning any Oscars, but overall manages the momentous task of packing a huge amount of history into a digestible storyline. It’s certainly an unmissable movie for spy fans, and likely to spark an interest in the subject in casual viewers, especially coming as it does amidst all sorts of real life spy drama going on in the world.
Posted by Tanner at 12:18 AM