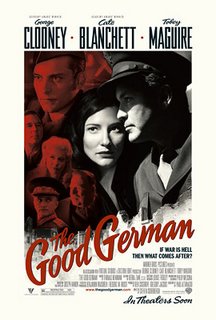 Now that Casino Royale has opened, we have two big spy movies remaining to look forward to this year, with very similar titles: The Good German and The Good Shepherd. (Put them together and one might say you’ve got a damn good pooch, but not even Groucho would stoop so low.) I’ve yet to see the latter, but the former is quite a treat, and one of the best films of 2006.
The Good German is Steven Soderberg’s best movie in years, probably since The Limey. Some might balk at calling it a spy movie, since none of the main characters are actually spies, but that’s exactly what it is. It’s about the origins of the Cold War, it features suspenseful intrigue and double-crosses and betrayals, and it takes place in that favorite spy movie city, Berlin. George Clooney stars as an American military journalist assigned to cover the Potsdam Peace Conference after Germany’s surrender in 1945. Toby Maguire is his driver, and the incomparable Cate Blanchett is the woman they’re both obsessed with. And so are American and Russian Intelligence, for some reason. Clooney tries to discover why–and who’s pulling the strings–and finds himself caught between Nazis, Nazi hunters, atom scientists, and the American and Russian armies.

The movie deals with subject matter I’m hesitant to reveal, because each new revelation is part of the enjoyment. Suffice it to say, I wasn’t very familiar with the subject, and I found it fascinating.

Equally fascinating is Soderbergh’s directorial style. He chooses to shoot it in black and white, emulating movies of its period, most obviously Casablanca. (Just take a look at the wonderfully evocative poster!) At a Q&A following the screening I saw, he revealed that he forced himself to shoot it as Casablanca director Michael Curtiz would have. For one thing, that meant not leaving LA (Potsdam is in Pasadena!), which certainly surprised me. Even though there’s evident stock footage of the bombed-out city, I assumed they had done at least some location work in Berlin. For another, it meant using only the five camera lenses that Curtiz used, according to his continuity scripts in the Warner Bros. archives. Evidently Soderbergh is used to using a lot more. Finally, it meant a different acting style than we’re used to seeing today.

Soderbergh said he had his actors study films like Casablanca, The Maltese Falcon and Mildred Pierce to get an idea of the style he wanted. He forced them to "externalize" their performances, as opposed to the "internalized" performances prevalent today. No method acting allowed. The results are somewhat mixed, but fascinating to observe. Tobey Maguire is the least successful of the three leads, though he appears to be channeling a young James Cagney. George Clooney is basically George Clooney, and that’s exactly what the role calls for. I can’t imaging he changed his usual performance style too much; he already emulates Carey Grant. Clooney is in some ways the last genuine, Golden Age movie star, two generations removed from his time. That’s perfect for this film. But the movie belongs to Cate Blanchett, in a tour-de-force performance (and a black wig) containing more than a hint of Marlene Dietrich. Her character is the most complex, and she conveys more with a single look than most actors manage in a monologue. The Good German should easily earn her another Oscar nomination.

But the movie is no mere pastiche. It’s power lies in the one way (actually, there are two ways*) in which it deviates from Soderbergh’s "shoot like Michael Curtiz" ground rules. Unlike Curtiz, Soderbergh is not bound by the Hayes Code, the censor of the time.

This means that Soderbergh is able to deliver a modern, R-rated adult drama in the trappings of a more innocent era of film. The "of film" is important, because the era itself was far from innocent. Since my generation’s main frame of reference for the 1940s is black and white Hollywood product, that tends to color my perception of the era. Sure, I know it wasn’t really like that, but logic won’t stop me from picturing it that way. Therefore, strong language and brutal, bloody violence have more impact in a black and white film that lulls your expectations into Casablanca territory. Soderbergh and screenwriter Paul Attanasio are also able to be more frank about the atrocities of the Holocaust than an actual 1945 movie could have been, and that too gives the film more impact. The decision to shoot in the style of that period isn’t just to be cute (although it does make it more fun for movie buffs); I don’t think The Good German would be nearly as powerful were it presented as just another modern, color film set in the past.

*Even though Soderbergh had intended to use old-fashioned rear screen projection for the driving scenes, he abandoned that idea when he found out how complicated and time-consuming the process was. Therefore, the rear projection is faked with modern greenscreen technology instead. In order to key the green, that meant shooting in color. The color was de-saturated in post and printed on black and white stock, but looks just as rich as the most high contrast film noir. Even though Soderbergh didn’t discuss it, it was also clear that he’d primarily used greenscreen instead of matte painting, most notably in a direct homage to Casablanca’s most famous matte.
Posted by Tanner at 1:12 AM