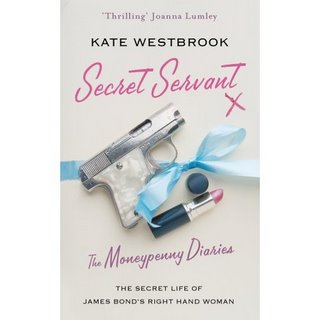 Samantha Weinberg’s second James Bond novel (writing as Kate Westbrook), The Moneypenny Diaries Vol. 2: Secret Servant, is even more fun than her first. Yes, despite that misleading cover that doesn’t even mention the main commercial attraction, this is a Bond novel. 007 just doesn’t happen to be the main character. Instead, as with the first volume, Ms. Weinberg uses the supporting character of Miss Moneypenny to examine the world of Bond’s Secret Service, and how M, Bond, Tanner and the others weathered the spy scandals that rocked real life England in the early Sixties.

I really like the way Weinberg has integrated real, historical events into Fleming’s world. Obviously, he couldn’t deal with issues so contemporary and scandalous when he was writing the books, but by placing Bond in a historical context (a good decision on the part of the new regime at IFP), Weinberg can. And forty-odd years later, she has access to information that Fleming couldn’t possibly have known, and a historical perspective. (In one retrospectively embarrassing attempt at injecting current events into his fiction, in the short story "Quantum of Solace," Fleming had 007 aiding Castro’s Cuban rebels against Batista! Who knew where that would lead?) It’s fascinating to see M and his team (usually glimpsed only in a single chapter of each Fleming book) grapple with these events. After all, a Soviet mole in the heart of British Intelligence poses a much greater threat to a man like M than a madman sending missiles off course from his private island! (And, lest one think that Soviet moles could never penetrate M’s Secret Service they way they did the real one, remember that Fleming himself mentions Burgess and Maclean in From Russia With Love, in which Bond is assigned to a Committee of Inquiry on the matter!)

While the first novel dealt with the Cuban Missile Crisis, this one revolves around Kim Philby’s defection. It works better, because the Cambridge spy ring was an espionage event that involved MI6 much more directly than the Cuban Missile Crisis. Possibly because of that, Weinberg also works Moneypenny (or Jane, to use the first name she’s given her), into the action much more organically. The first book’s greatest weakness was the barely credible way Moneypenny ended up in Cuba with James Bond. The way she gets caught up in the Philby affair is far more convincing. Really, how could she not? The secretary to the head of MI6 at the time would have been right in the thick of it all. It’s still impossible to believe that M would risk sending someone with as many secrets as Moneypenny into the heart of the Evil Empire–Moscow–for any reason, but the reason Weinberg comes up with is the most plausible I can think of. And it’s never been a requirement for any Bond novel to be entirely grounded in realism.

Secret Servant also revisits a particularly interesting period in Bond’s own fictional history. It begins following the events of Fleming’s You Only Live Twice, when Bond is presumed dead, and continues through his dramatic return in the opening of The Man With the Golden Gun. (For those a bit rusty on their Fleming, an amnesiac Bond comes back brainwashed by the KGB and attempts to assassinate his boss!) Witnessing these events through Moneypenny’s eyes gives us a unique perspective on a unique situation in the Bond canon, and allows Weinberg to fill in a few gaps from Fleming’s final novel, which he never had a chance to fully finish. (Bond’s "de-programming" is fleshed out somewhat more, for one thing.) Secret Servant ends just about where TMWTGG does, so the third (and supposedly final) Moneypenny Diary will give Weinberg quite a bit more freedom in how she uses 007 himself as a character.*

Fleming never gave us much detail at all on Moneypenny. She rated a few sentences in most of the books, but managed to make enough of an impression that the filmmakers, and actress Lois Maxwell, were able to turn her into the iconic figure she is today. Weinberg goes even further, though, fortunately. Her Moneypenny is a fully realized character, very occasionally in contradiction with Fleming’s version, but that’s excusable since she really belongs to Weinberg now. (That sentence may shock purists, but it’s true. Moneypenny is the main character of these books, and for their sake the author has the right to tweak a date here or there if it serves her version of the character better.) I found myself really caring about the character, and eager to get back to Moneypenny’s world, not Bond’s, while reading the books. Furthermore, since reading the first Moneypenny Diaries, I’ve enjoyed her brief appearances in the Fleming books even more as I’ve been re-reading them!

The novel isn’t perfect. The character of Bond still seems just a little off, but that’s really hard to judge since both Moneypenny Diaries have presented him in very difficult and uncharacteristic stages of his life (dealing with the death of his wife, recovering from KGB brainwashing). Still, there’s no excusing his incredibly forced interplay with Moneypenny, which is even worse than some of the scenes written for Brosnan and Samantha Bond (who took on the role in the last four films)! On his way to Casablanca, James says, "Come with me, Penny, please. We could make whoopee in the sand dunes." Ugh! Luckily, that’s about the worst line in the book and not representative of Ms. Weinberg’s generally top-notch prose.

The storytelling itself is also first rate. The Moneypenny Diaries are told on two levels. There are the "diaries" themselves, a narrative taking place in the early Sixties. Then there are the chapters at the beginning of each diary month featuring "Kate Westbrook," the supposed author/editor of the books, who is actually a character/narrator herself, and Moneypenny’s niece. In the first books these served mainly to contextualize the events in the diary, and reinforce the ridiculous conceit that the books were real. In Secret Servant, Kate Westbrook becomes more of an active character as she follows in her aunts footsteps, attempting to solve the decades-old mystery of another, undiscovered mole at MI6. She does this by following "clues left in her diaries... some unwitting... Others, I believe, she deliberately hid within her words, wary as always of the possibility that her secret diaries might someday be read." Unless they turn out to be red herrings, the clues seem rather obvious. Still, though, the mystery is left unsolved at the end of this book, and Westbrook begins receiving threats on her own life if she continues her digging. It’s an exciting cliffhanger in the framing story (even as the Philby story in the diaries is neatly wrapped up) that leaves me eager for the final volume next year.

*For better or for worse, she appears to be ignoring the events of Kingsley Amis’s 1968 follow-up novel, Colonel Sun. She makes reference in Secret Servant to M’s guardians the Hammonds being alive and well years after they were murdered in that book. Bond continuation authors have always had the option to use or ignore what they chose from the others who came before them (and after Fleming). Raymond Benson dispensed with a lot of the changes that John Gardner had made in the organization of the Secret Service (Gardner had done away with the Double O Section and had Bond reporting to a committee by his next-to-last novel, SeaFire) and 007's choice of weapon, but at least made a concession to continuity nuts by trying to explain things like how Marc-Ange Draco could be alive again after Gardner had killed him off. Now that the clock’s been reset on the literary James Bond back to the Cold War, it stands to reason that everything from the 80s and beyond (Gardner and Benson) would be out of the picture. Personally, though, I do wish that Colonel Sun was still regarded as in-continuity, since it was written so shortly after Fleming’s adventures. Charlie Higson’s Young Bond books do appear to fall within the Weinberg continuity. Of course, Bond’s all fiction anyway, and the only books that really count are those by Ian Fleming, so all of this is me just being a nerdy, nitpicky fan. The fact that Weinberg doesn’t adhere to Amis’s or John Pearson’s Bond chronology certainly doesn’t affect my enjoyment of her books one little bit.
Posted by Tanner at 12:29 AM