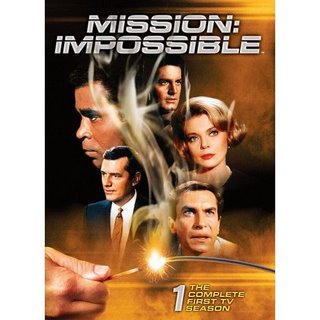 Tomorrow one of the glaring omissions in many a spy DVD library will finally be corrected. Tomorrow, CBS/Paramount at long last issues the first season of Mission: Impossible on DVD! (Now if only somebody would do something about The Man From UNCLE...)

When J.J. Abrams said during the press tour for M:I:III that Mission: Impossible was his favorite TV show, he wasn’t just saying that to pimp his new movie. Watching Season 1 on DVD, it’s clear that Abrams’ Alias owed more than a small debt to the original M:I. Basically, what wasn’t borrowed from Bond in Alias comes directly from Mission: Impossible. Both shows were essentially heist or con shows masquerading as spy shows in order to justify the heists, to make the heroes good guys. (If you’re stealing from the East... or from some cryptic enemy organization, then it’s okay!) Both featured teams of uniquely qualified individuals who came together week after week to extract some enemy-held Macguffin from an exotic location. And both were structured similarly, beginning with mission briefings in which the team were assigned their roles. So if you’re a fan of Alias, you’d do well to check out M:I. 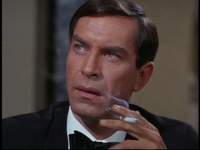 Outside of James Bond, Mission: Impossible is probably the most iconic spy title in any medium. Even if you’ve never seen the show, you know its distinctive theme music, you’re aware of its famous "lit fuse" opening titles, and you’re familiar with the phrase, "Your mission, should you choose to accept it..." Mission: Impossible contributed all of these vital elements to the modern spy lexicon. All are present and accounted for in the first season (1966-67).

More or less, Mission: Impossible seems to have been fully formed from inception, unlike some shows which take a season or two to find their true identities. (Like The Avengers.) The "less" comes only from the absence of staid series lead, Jim Phelps (silver-haired Peter Graves, also iconic), who wouldn’t come aboard until Season 2. The team leader in the first season is Dan Briggs, played unremarkably by Steven Hill. He’s a pretty boring leader, but that doesn’t really matter because this series really belongs (in this season, anyway) to Martin Landau, who is fantastic. (Strangely, Landau is billed as a guest star or "special appearance" week after week, even though he’s in every episode.) Barbara Bain (as Cinnamon Carter) and Greg Morris (as Barney Collier) also manage to find more screen time than Hill, and use it well. Including strong man Willie Armitage (Peter Lupus), the whole team is in place except for its leader. And the episodes are mostly really great, so I’m glad that Paramount had the courage to begin with Season 1 rather than starting with the debut of the more famous lead, as some shows do. (The Avengers and Dark Shadows come to mind, though both have since gone back to the beginning.)

From the few episodes of Mission: Impossible I’d caught in syndication over the years, I had the impression that the show was rather dour and slow-moving. I’m not sure why I thought that; I guess I must have just caught some sub-par episodes. I’m happy to report that M:I is actually lots of fun. While it’s certainly not as light as The Avengers could be, it’s far from humorless. But any humor comes from the likeable characters rather than bizarre or surreal situations. And far from being slow-moving, most episodes are tightly-plotted and exciting. (That music sure helps, too, every time it kicks in.) Compared to Sixties spy shows already available on DVD, I’d say Mission: Impossible is closest in tone to Patrick McGoohan’s Danger Man (aka Secret Agent). However, being a team show rather than following a solitary agent, it is obviously a much different program.

Scenarios in the first season tend to be down-to-earth and realistic. A number of missions involve discrediting or removing left-leaning leaders from foreign countries, and we know the CIA did its share of that during the Cold War! Other plotlines hinge on protecting American overseas industrial interests, including oil. It’s interesting that these stories could be played unironically back then, without a hint of murkiness or moral dilemma. Sixties audiences must have been more willing to buy into blind patriotism.

Speaking of the Cold War, I’m surprised at how good life in Communist countries is presented! I would have expected a more propagandist (or at least realistic!) approach, showing miserable living conditions and tiny dwellings. Instead, every time the team goes behind the Iron Curtain (which is frequently), it looks just like America. In one episode ("A Spool There Was"), Cinnamon goes to the house of a typical, poor Communist family and it’s a huge, luxurious two-storey affair decorated just like an American house. (It’s probably the set from a CBS family sitcom, but surely there were other, smaller sets available!) And the lakeside town in which this family lives is full of vacationers having a good time, and balloons... lots of balloons. It looks like Wisconsin’s Lake Geneva with secret police. Overall, Communism looks pretty fun. (That comes in handy, however, in the ubiquitous episode in which the team infiltrates a fake "American" town in the middle of the Eastern Bloc where foreign agents are Americanized, like John Travolta in The Experts.)

Unlike so many spy movies and TV shows at the height of Bondmania, Mission: Impossible doesn’t play like a 007 ripoff. In fact, it’s different enough that you definitely notice when they do their "Bond episode;" that one doesn’t just feel like one of the others. It’s well done, though, and probably my favorite of the first season. "Odds On Evil" borrows its plot from Ian Fleming’s Casino Royale, and after watching Bond play poker in the new movie of that title, it’s nice to see baccarat played in M:I, as it was in Fleming’s b 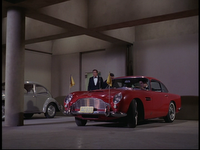 ook. And cool to see Martin Landau in a tux, "being Bond!" The Le Chiffre-surrogate villain our heroes need to defeat at the gaming tables is a cross between Monaco’s Prince Ranier and Saddam Hussein. He is the leader of a tiny European principality whose primary revenue comes from their famous high stakes casino who plans to invade his oil-rich neighbor. And just in case you haven’t already figured out they’re tipping their hat to James Bond, the producers even throw in a snazzy red Aston Martin DB5 near the end! (Amazingly, all five IMF team members manage to pack themselves into it, rather uncomfortably.) 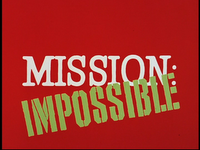 As I mentioned, Landau is thoroughly fantastic as the team’s "man of 1000 faces." Even though that’s initially his speciality, he quickly becomes more of an all-around spy character. Greg Morris is charismatic and likeable as the serious-minded electronics expert (who sometimes plays M:I’s version of Q, and is also capable of MacGuyver-like feats such as rigging a perfume bottle into an I.V.). Barbara Bain does a good job as the team’s honeytrap, ex-model Cinnamon Carter. It’s a good thing she’s a fine actress, though, because, frankly, Bain looks a bit past it to play a believable sexpot. She was already 35 in the first season, and looks even older with her yellowed smoker’s teeth. (She smokes pretty constantly throughout the season.) Physically, it’s hard to buy her as an ingenue (who’s consistently referred to as a "young woman" and sometimes called upon to go-go dance!), but her performance is engaging enough that she somehow pulls it off.

The seven single-sided discs are divided among four double slimpacks housed in an attractive outer box, very similar to CBS/Paramount’s Wild Wild West packaging. The cover art may be of the Photoshop montage school, but it’s a well done one. And it’s shiny, too, so points for that! The font makes no sense, though; I don’t know why they didn’t use the show’s famous title treatment.

Unfortunately, there are no extras on this set. That’s a little disappointing after the wonderful array of commentaries and introductions on The Wild Wild West. I hope Paramount will offer some of that with the next season, once Peter Graves comes aboard. Sound and picture, however, are exemplary. The show looks great, exactly how a Sixties spy show should, full of vibrant colors but never looking "old." It’s also (surprisingly) been remixed in 5.1 surround sound, though the original mono track is also present for purists and Luddites.

Watching these episodes makes me want to watch the original DePalma movie again. I never realized how many homages to the series it contained. Besides the incredible credits sequence, there are some bits that are taken directly from the show. In the second episode, "Memory," for example, the IMF team fake a fire at a prison. They then go in disguised as firemen. Sound familiar? Tom Cruise’s buddies do the same thing to break into CIA headquarters in the film.

Mission: Impossible may be long overdue on DVD, but it’s finally here and it’s one of the essential purchases of the year for spy fans. Season 1 is a great set, and I can’t wait for the 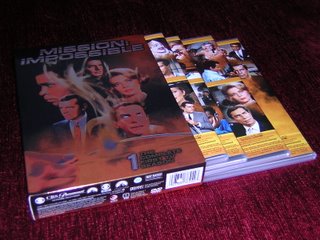 Hi! Just two small points...
1) Steven Hill seems uninspired for a reason... he was playing as he thought a REAL spy should be... colorless, drab able to instantly fade into the background. He is known for being exact in his protrayals. Problem is, a correctly played Spy makes for a dull television character. That (and other factors including his strained relationship with the show's creator) lead to his 'leaving' the show after a season.
2) Martin Landau (as Rollin Hand) was under contract to another studio at the time and had to wait for his contract to run out. They got around it by listing him as a 'guest star' for the first year.In future years Landau would co-star with Peter Graves.
3) Just some general comments.. I went and got the 20 volumes on VHS years ago... what I really like about the early years is that the special devices were based on technology of the time... not really futuristic.... forinstance, they needed to drill though a elevator or something without making noise, so they used drills back with foam. They also knew how many minutes they had before the drill would burn up from lack of ventillation, so they used several to achive the one goal!!! The best were the two-parters, where Part One would be just preparation, training and study for the mission.. something they did not have time for in a single episode.
Well, I've rambled long enough.. I agree with you 100% on this and every Spy fan should have this in their library!

Interesting points! Thanks for sharing. I suspected it was a contractual thing for Landau, but it's still weird!

But the situation with Martin Landau was that he was intended to be a rotating guest star. Steven Hill was an Orthodox Jew, so he was unavailable from Fridays from 4pm and throughout Saturday. Martin Landau was then used more for additional episodes and this helped to cover Steven Hill's absences. Martin Landau also had an agreement that while he would appear throughout the rest of the season, he had the option of leaving and doing feature film work.