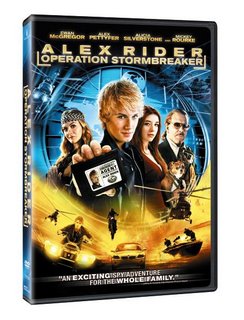 In my earlier diatribe about The Weinstein Company’s mishandling of this movie’s theatrical release, I never actually reviewed the film. Now I’ve received the forthcoming Region 1 DVD, so it seems like an appropriate time to do that.

The DVD release strategy may not be much better than the theatrical one (releasing it exclusively to Walmart and Blockbuster and neglecting popular online vendors like Amazon and Netflix seems to insure that this movie will never reach the wide audiences it deserves in the United States), but at least the folks at Genius Home Entertainment seem to understand the film (no more cheesy "Rule the school!" tagline) and present it on DVD with some decent special features. (Although they strangely omit the director’s commentary track available on the Region 2 DVD in England.)

Most importantly, the presentation of the film itself looks good. It still has the American version of the title up-front (the cumbersome "Alex Rider: Operation Stormbreaker"), but doesn’t appear to be cut in any way and isn’t relegated to the miserable "full screen only" fate that sometimes befalls DVDs aimed at family audiences. The anamorphic widescreen transfer looks and sounds good.

Stormbreaker (the movie) is, as its cover blurb announces, "an exciting spy adventure for the whole family," but it will probably disappoint fans of Anthony Horowitz’s Alex Rider novels. As far as its place in the whole "teen spy" genre, it’s much more original and adult friendly than the Agent Cody Banks movies, and it’s more of a spy movie than the visually exciting "Spy Kids" fantasy series. As the participants make clear in the DVD featurette about comparing the book to the movie, Horowitz’s books succeed because he never patronizes his readers. They aren’t the kind of "kids’ books" that middle schoolers would be embarrassed to read. They’re essentially adult novels for kids, if that makes sense, and fairly dark in tone. The book series is definitely in PG-13 territory, but the movie is defiantly PG. The movie is jokier in tone, with silly bits like a runaway wheeled house full of bumbling, wailing soldiers undermining its action a bit. I’ll put it this way: it’s much more Roger Moore than Daniel Craig.

If devoted readers manage to get past that initial disappointment, though, they’re likely to enjoy the movie. Luckily it is faithful to the Horowitz books in that it remembers to be an action movie first and foremost. Unlike the aforementioned Spy Kids and Cody Banks, which are kids’ movies with action, Stormbreaker is an action movie aimed at kids, with plenty to enjoy for adults as well. It’s basically after the same audience as James Bond (well, up until Casino Royale, anyway), which is appropriate. When I was 13, I was already a huge Bond fan, and definitely fantasized about being like Bond and liked the idea of a teenager plunged into that kind of adventure. Unfortunately, the only thing out there for me at that time was If Looks Could Kill with Richard Greico (which I do actually have fond memories of). I think I would have loved Stormbreaker back then, and I hope that the millions of kids today who love Bond movies and video games manage to thwart the Weinsteins’ best efforts and actually see this movie!

Crucial to its success is lead actor Alex Pettyfer. He’s a very likable lead, and a good Alex Rider. He’s backed up by an amazing cast of mostly British actors. Ewan McGregor, though top-billed on the American DVD cover, has a cameo as Alex’s doomed spy uncle, Ian Rider. It’s basically McGregor's take on 007, which is interesting to see, since he was widely rumored to be a strong contender for the role. Bill Nighy is reliably entertaining (in a comedic take on the "sinister bureaucrat" role he’s perfected) as the unscrupulous head of MI6, who has little regard for Alex’s safety. Stephen Fry (one of my favorites from his days as Jeeves) basically does his best Desmond Llewellyn as the Q-like character, Smithers (though he’s a far cry from the book’s jolly, morbidly obese gadget master). Andy Serkis, Robbie Coltrane and a grotesque, villainous Mickey Rourke round out the talented cast. Even Alicia Silverstone does a good job as Alex’s housekeeper and guardian, Jack Starbright.

The villains (Rourke as the Americanized Darius Sayle, changed from the book, and Missi Pyle as his Teutonic lieutenant, Nadia Vole) are broad caricatures played more for comedy than threat, which lessens the tension of the book. But the action scenes are played straight for the most part, and are quite exciting. There are some very impressive Bondian stunts, but they’re slightly marred by the rather generic, two-years-ago electronica music that kicks in just early enough to spoil any surprise and alert you that a fight is coming up.

Basically, I was disappointed that most things were played a little more comedically than in the book, but thanks to the superlative cast, the comedy is good, so that shouldn’t bother anyone who hasn’t read the book. Stormbreaker is more or less the teenage spy movie I always wanted as a kid. Most adult James Bond fans (especially those who enjoy Roger Moore’s 007) will also appreciate it as a good, light action movie and a loving homage to the series that inspired it.

The best featurette on the DVD is called "From Page To Screen" and focuses (naturally) on the adaptation process. The actors and producers cite the very darkness and un-patronizing tone of the books that I responded to as the reason they were attracted to the project, so it’s a mystery why those things are largely absent from the final product. Perhaps the responsibility lies with Horowitz, who adapted his own novel into a screenplay. He certainly appears proud of his product. Horowitz is interviewed a lot for this featurette, and he seems very excited about the movie. Despite the fact that he’s responsible for many produced TV series (like Foyle’s War and Poirot), he seems to genuinely regard Alex Rider as his best work. His enthusiasm is infectious, and it’s easy to see how he could have gotten so caught up in the thrill of the movie process that he compromised his original work a bit more than he realized. Or maybe he’s just less demanding than I am and allows himself to enjoy what is a very fun, humorous movie and not care about the differences. The featurette does explain why certain things were changed from the book, and does a good job of it.

"Casting Alex" consists mostly of other actors saying nice things about Pettyfer, and a little bit of Pettyfer saying nice things about himself. That’s not really fair, because he doesn’t come off as egotistical at all, merely excited to have the greatest job a 15 year old kid could have. There’s a good featurette on the stunts, which were surprisingly mostly physical and not computer-generated. Watching this really reinforces my assertion that Stormbreaker is an action movie above all else. There are some really cool stunts.

A few other featurettes focus on shooting and designing specific scenes and locations. Played back to back, all the featurettes form a pretty comprehensive making-of documentary. (Unfortunately, there is no "Play All" option.) Also included is the theatrical trailer (the inferior American one, not the awesome international one). Missing from the British disc are the music videos by pop bands no one cares about over here, and that’s no great loss.

I realize that I sound pretty negative, but that’s only comparing the existing movie to what could have been, to an imaginary paradigm that it couldn’t possibly live up to. It’s a very entertaining action/spy movie in the tradition of Roger Moore Bond movies. Fans of those movies would be well served to track it down from whatever limited, exclusive vendors it ends up being available from. This movie deserved a legitimate American theatrical release, and I hope the audience who missed it there finds it on DVD. I also hope the DVD manages to overcome the odds Genius has stacked against it and become enough of a hit to warrant a sequel, since Point Blanc, the second book in the series, is actually much better and has a lot of potential as a movie!
Posted by Tanner at 12:33 AM