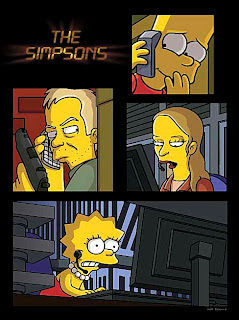 Both The Simpsons and South Park have done animated 24 parodies this season. The former aired just last week, and featured Keifer Sutherland and Mary-Lynn Rajskub as the voices of Jack and Chloe. The 18-year-old show even changed its trademark opening for this episode, instead borrowing 24's distinctive digital split-screen beginning, complete with Kiefer's voice-over doing a fake "Previously on 24... I mean The Simpsons."

Principal Skinner has initiated a Counter Truancy Unit at Springfield Elementary, and recruited all the usual nerds (Martin, Milhouse, Lisa, etc.) to run his tech operations. Running complex surveillance, CTU stumbles on a plot by the school bullies (Dolf, Jimbo and Kearny) to set off the ultimate stink bomb at the school’s bake sale. When agent Milhouse is compromised (thanks to Homer), Skinner is forced to pull Bart out of detention to save the day. Of course, like Jack Bauer, Bart Simpson plays by his own rules...
Writers Billy Kimball and Ian Maxstone-Graham do a great job of parodying 24's split-screens and commercial break cliffhangers. They also hone in on the show’s tendency to cut from a very tense, exciting moment to some boring, mundane soap opera moment at CTU. (In this case, they cut away from Homer and Milhouse stuck on the train tracks with an oncoming train approaching to check in on Marge baking a cake.) They also send up the show’s over-used device of the mole in CTU by having Bart discover the identity of such a mole and then drawing out his revelation of his or her name to Lisa long enough to get knocked out by said mole. ("Lisa, I don’t have much time, so I’m just going to go ahead and say the name of the mole. The name of the mole in CTU is..." or something along those lines.)
The episode’s best moment comes courtesy of Jack Bauer himself when Bart’s investigation briefly intersects with his as their cell phone signals get crossed. Bart can’t resist one of his old prank calls (like he used to pull on Moe all the time) and tells Jack his name is Ahmed Adudi (sound it out), which Jack duly passes along to Chloe. When she points out that he’s being cranked, Jack utters his signature line: "Damnit!" And it’s great. 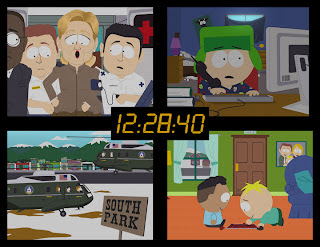 Not sharing a network with 24, South Park didn’t have access to Sutherland and Rajskub, but they managed an equally perceptive parody–and beat The Simpsons to the punch by about a month. Typically, theirs is a much cruder take on the subject, but it’s at least as funny if not more-so. Being more political than The Simpsons, Trey Parker and Matt Stone meet 24's famously right-wing politics head-on. Cartman becomes convinced that the new Muslim student in his class, Bahir, is a terrorist when all the other kids are perfectly accepting. He phones a sick and homebound Kyle to act as his Chloe and look things up on the internet for him. They get a lot of mileage out of "interfacing" MySpace pages with YouTube, cross-referencing Google Maps and checking up on Ebay purchases. Doing all this, Cartman and Kyle accidentally hit on a real terrorist threat in South Park–one aimed against the inclement Hillary Clinton rally. (Cue once more those razor-sharp, unaffiliated South Park political barbs, turned up to maximum offensiveness...)

Cartman phones the CIA ("whispering really loudly for dramatic effect," just like Jack!) and demands to speak only with the President himself, which he’s allowed. Soon all manner of government agencies descend on South Park, and in succession proceed to take over Kyle’s bedroom as a command post and commandeer his computer, each new agency pulling rank on the last one and claiming they’re in charge. ("Not anymore you're not," announces the next, not missing a beat.) This nicely sends up the constant pissing contests between various bureaucrats for control of CTU on 24.
South Park also takes aim at Jack Bauer’s penchant for torture, by having Cartman mercilessly fart on Bahir’s parents in an attempt to get them to tell him what he wants to know. Upping the ante, he injects himself with apple juice to increase the potency of his flatulence. (Leading to the immortal line, "Did he just inject himself with apple juice?") Yes, I said it was crude!
They work in a great split-screen gag where Cartman and the head of the CIA, each talking on cell phones and in different panels, discover that they’re right next to each other and the panels merge. And they tie things up with the revelation of a conspiracy so elaborate it could have been dreamed up by the actual 24 writers, involving decoy groups of rogue Muslims, Russians and "America’s oldest enemy," the British (the "Red Coat" variety, seen sailing on Washington in 1812-era Naval get-ups)! The South Park episode certainly isn’t for the easily offended, but both half hours of animation turn out to be terrific send-ups of 24.
Posted by Tanner at 7:27 PM